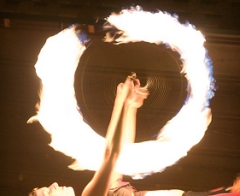 I dunno guys, just haven’t had much to write about lately. Skipped last night (well, kinda, read below), and not feeling much of anything bubbling to the surface tonight either, for that matter. I mean, I should have tons to write about – We went to an awesome wedding Friday up in Tahoe, spending a Keaton-less night in a cabin/mansion thing on the hill at a party with fire-eaters, an open-air hottub, and piles and piles of revelry. I was even on fire, at one point.

So… I should have stuff… but I dunno.

Some of you may have seen a “blip” of an entry hit the blog around the midnight that straddled Sunday and Monday (I wrote it that way because I never know if I refer to midnight as Monday morning, Monday night, or Sunday something). I had set my Sunday writing to auto-publish at midnight, like I normally do, but hadn’t every finished writing it (I gave up around 10pm with only a quickly-typed opening paragraph but forgot to turn off autopost). Anyway, I realized what I’d done when I woke for work Monday morning and I recalled the entry. Forgive me the mistake, yes? Those of you with RSS readers can probably go back and check it out, but there’s really no need as I’ve integrated what was salvageable right here.

Anyway, today was a busy day at work. In early for a sunrise meeting with ze Germans, and a quickie lunch with my buddy Ben before coming back to work on a presentation I’m giving in a few weeks – right after we get back from Florida, actually. Thinking about it, I haven’t actually stood in front of a crowd and presented for a good bit of time now – I’m sort of looking forward to all the prep and the rush of “knowing” things when asked. That is, assuming the thing goes well, and not like some of the stinkers I’ve had before (they’re rare, I swear, but they happen). I’ve been putting in some prep time for this one though, and I’m fairly certain all should go well. Anyway – today was a busy day at work, I suppose.

Sometimes I dream about living on a boat. Nothing huge like a staffed yacht or anything, but a large sailboat (with backup power, or something) perhaps. Maybe just a year, drifting on the trades, stopping at small ports for food and supplies, sunning… Thing is, I know next to nothing about boat-life, let alone sailing… and I think there’s quite a bit of science behind the whole thing, and that my ignorance would likely need to be remedied before I set out. But, man, there is something appealing to it. Wouldn’t it be cool to just pack up the family and take a year off? I mean a whole year. Three-hundred, sixty-five days together on the sea, pitching with the current. Like most of my modern-man escapist womb-fantasies, this one too comes with 20th century amenities like music and internet and TV for Sharaun. She’d never go, anyway. Maybe take away the storms and the loneliness and the dangers of being so remote… maybe then she’d consider. But nah… just a lark.

OK, I’ve got nothing.  Sorry.  Before I go, check out Keaton and her friend Jake together from our camping trip a few weeks back over on a recent update to this website right here.