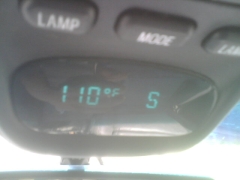 The Northern California summer showed up with a quickness today, with our first 100°+ day of the season. It’s that dry, baking heat, the kind that makes the air around you so warm it presses; like it’s a physical thing. The picture accompanying this entry was taken in the Ford as I ran a bunch of errands at lunch. The display read 111° at one point, but I missed the chance to take a picture. And, even though I don’t trust that gauge much, it was still hot as sin here today.

Summer, we welcome you with shirts doffed and feet bare. Pour out upon us your bounty of fermented beverages and fire-warmed meats. We await.

See, I’m pretty sure that the house a couple houses down from us is a “weed house.”

Huh? You don’t know what a “weed house” is? Well, let me break you off. A weed house is a home that is used specifically for the purpose of growing marijuana. Sometimes they are called, quite fittingly I might add, “marijuana grow houses.” See, someone purchases a home (usually a newly built one or in a new neighborhood), spends tons of money outfitting it with things like grow lights, automated watering systems, and high-tech air circulation and filtration systems (to avoid the house reeking a telltale stench when neighbors walk by). Oftentimes the owners of the indoor grow operation will bypass the electricity meter, effectively cloaking the massive amounts of power the operations require from the utility company (an easy way to get caught, as someone will always miss 1.21 jigawatts). Then, with a crop planted, the owners simply stay away and wait on the harvest.

Sound crazy? It happens, I swear. They busted a big ring of them a few cities away from here just a few months back, and similar setups are cropping up all over the country.

Anyway, let’s take a virtual walk down our street. See, we live in a new neighborhood, in houses built between four and six years ago (when we moved in). Our house is on the corner, so let’s start walking towards the communal mailbox unit (a modern-day phenomenon which I hate, but maybe I’ll write more about that later).

Oh, here’s our neighbor’s place. They’re nice folk, don’t live here full-time though. Like plenty of “bay” people, they own a couple places – one in the bay and one over here closer to the mountains. They live primarily over there, and show up around here every few months or so. One drawback to this ping-pong arrangement is that their lawn gets mowed really infrequently, and they haven’t invested any time or effort in the back (which comes absolutely un-landscaped when you buy the place). Unfortunately, this means that both their front and back yards are rife with weeds. We’ve actually become friends with these folks, they have a little girl almost exactly Keaton’s age. We’ve had dinner over there, had them over for playdates, and even exchanged e-mail addresses so we can know when they’ll be in town. And, other than their overtaken yard, they seem like right-nice folks.

Let’s keep walking, shall we.

Ah, and here’s our neighbor’s neighbor’s house. This is the weed house, by the way. See, no one lives here. In fact, no one is has ever lived her, nor is anyone ever even here, period. Essentially, this is an abandoned house. The shades are forever-drawn, and, like our neighbor’s place, the front “lawn” has gone to weed and the back “yard” is just a bunch of weed-covered dirt and rocks.

As an aside, it really stinks having two weed patches right next to our house (I’m talking the kind of weeds you kill with Round-Up now, not the kind you chief while listening to “Stir It Up”). All the seed from the bumper crops that grow unchecked in their yards ends up settling in every dirt-holding crack, crevice, and thin patch in our yard. I’m convinced that my personal battle with weeds is as bad as it is solely because I live next to these two weed-strewn lots. Anyway…

The funny thing about the weed house is… our immediate neighbors mow the lawn there. Remember, the ones we are friends with? They mow it. Well, they do when they’re in town, at least. He mows them both. I’ve never asked him if he knows the people who own the house, but I’ve always wanted to know. Seems like he must, since he mows their lawn, right?

Over time, I’ve developed this theory… check it: Our neighbor owns his house and the weed house, that’s why he mows both lawns (duh). He and his family coming into town every few months is just a front for tending the crops. In fact, he’s probably got underground tunnels between the places or something, so he can come and go without fear of being seen. Being (somewhat) serious, though, he could likely maintain and harvest the crop under cover of night, going from backyard to backyard rather than out front – thus staying fairly well-hidden.

Yup, that’s my theory. My neighbor runs the weed house two lots down from us. I even have “evidence,” wanna hear it? OK… get ready: When we were getting ready to go to Mexico on vacation recently, we got an e-mail from our neighbors saying they’d be in town that very week and wanted to get together. We regretfully replied that we’d be vacationing in Mexico that week, and would sadly miss them. Their reply? Commiseration at our bummed-ness for not being able to socialize, and then, this: “Mexico, sounds fun! Do you know if they search all the luggage you take, even carry-ons?”

Actually, I was just thinking, our neighbors (who we really do like, a lot) may be ‘net savvy enough to pull up our domain based on Sharaun’s e-mail. If so, I kinda regret writing this. Even still, it’s more for funny than it is for accusation – I promise. And, guys, even if you are totally growing piles and piles of dank-dank nugs in that house, we can still hang out – we’re cool. Sharaun, she might narc, but me… I’m on-board.

Have a good weekend, talk to you Monday.

2 Replies to “piles and piles of dank-dank nugs”