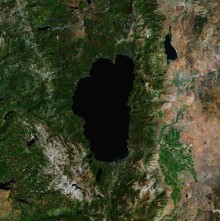 Hump-day is now behind us and we’re off into the home stretch. We have a wedding to attend in the afternoon Friday, so I’ll be cutting out halfway through Friday to head up into the hills for the ceremony. Keaton’s spending the night with a friend from Sharaun’s mom’s group, they have a two-year-old also and he and Keaton get along swimmingly. I think this is the first night we’ve been away from her where one of our folks aren’t watching her, that’s some kinda milestone or something, right?

Let’s talk about the wardrobe problems I had today.

The sock I wore on my right foot was one of those ones where the elastic in the ankle-part has all given up its elasticity, and it kept getting sucked down into my shoe as I walked. Terribly annoying, I just tossed the thing when I took off my shoes this afternoon. Maybe it’ll help even up the sock numbers anyway, since I invariably have an odd numbered total anyway.

That, and I decided to give these new-fangled style of boxer-briefs Sharaun bought a second try. On the surface, they look great. They’re the same style I happily wear each and every day, but with the added bonus of the elastic band around the top also being covered in the softy-cotton material from which the shorts themselves are made. I know, you’re thinking – this could be revolutionary, like when they stopped attaching scratchy tags to undershirts and started silk-screening them on instead. Potential new heights in comfort. Yeah, well, that’s bunk. For some reason, when they covered the elastic, they also shortened the dang things by an inch or two per size. Now they feel great around my waist, but ride up as if my feet were on fire and they are making their getaway.

Clothes can be problematic for me, I guess.

Today at work someone placed a large box in the aisle with the word TRASH written on it. I took the box into an abandoned cube (cubes are what pass for “offices” in the modern corporate world, for those of you yet un-matriculated) and, with a large black marker, appended, To you maybe! With a little imagination… THE MILLENNIUM FALCON. Except I spelled both “millennium” and “falcon” wrong in my haste. Actually, the misspellings likely made it even funnier to the casual observer. Yeah, that’s what I’m gonna think… even funnier. 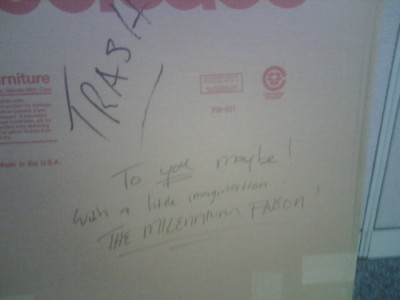 I think that’s it then, folks. The best part was the writing on the box, right? I mean, other than that there was just the bit about the socks and underwear. Oh, and the wedding and being Keaton-less. Man, I gotta start coming up with the good stuff again soon or I’m gonna lose you all.

I’ll see ya around.