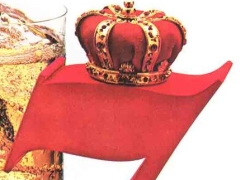 Hi Thursday. Had a lot of fun writing this entry tonight, may try to do a “theme” thing along these lines. It may not translate well into fun reading, but for me it was like reliving a ton of good memories. Here then, my love-note to an old friend. Enjoy.

I remember the night we stole those tiny plastic bottles of Seagram’s 7 from your dad’s liquor cabinet. We had already split a cup of Jack Daniels and brought the bottle back to the level we found it at by adding water, and we needed something for the road. We were going out; going walking. It was one of the first time’s I’d ever had anything to drink, we were so young. I remember the thinking that the Seagram’s was smooth, not like the Jack Daniels, although they both burned like fire with each swallow. With several bottles in our pockets we set out into the night, avoiding the pools of light under the streetlights, slinking around with our miniature bottles. We weren’t out to cause trouble, we just wanted to know what it was like to be drunk. You remember where we went? We walked up Pinewood, took a left on Hamilton, and another left on Spirea. I can remember holding my arms out my sides like I was flying as we walked down the middle of the quiet streets.

You remember when we went to that girl’s house, her dad was a sheriff’s deputy right? Remember they had adopted a former police dog as their pet, that dog was so cool. Well, right up until he “alerted” on her boyfriend when he got there with a bag of weed in his jeans. Man, that was a stupid move. How embarrassing.

Remember when we were driving around late that one night, right around your old house. Some kid left his Big Wheel in the driveway and we pulled it into the street and ran over it at high speed multiple times. I’ve never felt more awful about any of my youthful exploits, that’s the one thing I wish with all my heart I could take back. I could still pick out the house… I wonder if the same family still lives there? I should drop-ship a new Big Wheel from Amazon with a note of apology, maybe they’d get it.

Remember that night up against the fence at Jordan’s place? I was scared for you guys, but he wasn’t messing with me so I just laughed. Sorry about that.

Remember how shocked we were that morning we all woke up from our drunken night prior to find him sitting in the Lazy Boy? He had that plastic squirt-gun my dad used to discipline the dog in his hand and he was pointing it at us as we walked out from the hallway, pulling the trigger and laughing as he squirted us with water. I mean, what was it? Only like a month or so since he killed that kid? I couldn’t even bring myself to pick up a toy gun, let alone pull the pretend trigger. That was the morning of the game where parents pay us to have their kids run off a cliff. Fantastic.

Remember we’d drive real slow by the pool in case she was lifeguarding that day? Good thing they put in those massive speed bumps, or else it’d be all obvious.

Oh, I got another one. Remember the contests we’d have at the park? You know, you had to take a hit from the joint, hold your breath, and then run as far as you could down the boardwalk before you had to take another breath. Then you had to stand in your spot until the next person came running, trying to best your position. After that you could leave and go back for another toke. I just remember running with the smoke bulging in my lungs, wanting so bad to laugh as I tried to reach the next person. I think that was the night we played karate on the water fountain. You remember how badly we kicked that thing? It came off the wall.

I remember thinking you were so stupid for coming to the last week of highschool drunk. I mean, you almost didn’t get to graduate or something, right? Gutsy.

Remember throwing lit strings of firecrackers out the windows of my moving car at bicyclists? That one time the I was going a little too fast and they blew right back inside without us noticing. My ears rang for a good half hour, and we had to pull over the smoke inside was so thick. That gunpowder and paper smell stuck to the car for a week I bet.

I remember when you told us we could spit in your house. You’d spit on the carpet and throw bologna on the ceiling. I guess I never really understood that. But when we stuffed that kid in a trashcan and blared “Blame it on the Rain” inside through that megaphone, I knew I loved the magic that could happen there. I think we could’ve damaged his hearing or something, why did we do that? Who else’s place could’ve been the staging ground for the rotten-egg offensive? It truly was one of a kind.

Remember the satanic flier? The Mammoth Smoke? Rinker? The gift? Trying to grow weed in the planters at the mall? Buying rolls of pennies to throw at old people? The fort? Pete & Joey? Remember all the fire? That night at the beach with the cult? Remember when we made this song?

(I can’t help but wonder if this was around the time we’d discovered Ween’s classic album, Pure Guava. While I was recording and converting the old tape to MP3 Sharaun told me vehemently, “David, please turn that off already – it sounds terrible; it sounds like a headache.” Ha! I told her to be glad I wasn’t processing the entire 30min tape…)

I remember we found this life-size stuffed dog sitting alongside a garbage dumpster at a Chinese restaurant. We came up with the bright idea of tying a rope around its neck and hooking it to the trunk of the car. Then we rolled real slow through suburban neighborhoods dragging the thing. When people saw it and assumed we had neglected to unleash a real dog from our car, a dog which was now being dragged slowly to death down the street right in front of their eyes, they flipped out. As they screamed, hollered, and tried to wave us down to alert us to our mistake – we’d flash huge smiles, wave right back in a friendly way – and speed off. I just wish we’d taken snapshots of the horror on their faces. It was a perfect spontaneous thing.

Man, after I wrote all this down and re-read it, I decided to send it to Andy (who I’m addressing all those “I remembers” to, since it wasn’t that clear) so he could fact-check me. It was then that he reminded me we’d made an effort long ago to memorialize these types of youthful activities, and that he had a copy. What showed up in my inbox was a scanned PDF copy of a printed e-mail exchange Andy and I had back in 1996.

Titled “The List of Power and Destiny,” it provides sparse documentation of our most memorable exploits together. Reading through it, was pretty happy with how many I’d remembered on my own for this post. Anyway, below is the entire List of Power and Destiny, just for reference. Oh, and, if you see something intriguing on there and want to hear more about it, drop me a comment and maybe I can accommodate. 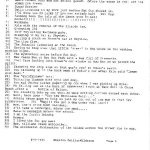