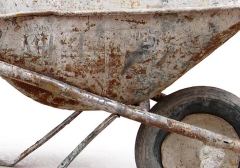 7:30am on Sunday night and Sharaun is in the kitchen stirring a beef stew she’s had in the crock-pot all day. It smells fantastic in here, and I’m glad I was out working in the yard all afternoon so I didn’t have to breathe the temptation.

This weekend I had a goal: landscape a little planter patch on our front sideyard. Way back when I did all the work on the backyard, I drove all manner of truck and heavy equipment over that side of the yard to get from the street into the backyard. In doing so, I ruined the minimal landscaping the builders had done (which really only consisted of some much, a few plants, and a drip system anyway). Since then, I’ve used the space (about ten feet by fifteen feet) to store a pile of mulch I had leftover from finishing the backyard. And, that’s how it’s been now for some three years or more – a pile of much. It’s always bothered me.

As I was saying, the pile of mulch never really worked for me as a permanent landscaping feature, especially since it’s in our front yard. You’d think, as anal as I am about the yard, I’d have done something with it by now. But, alas, the scales inside me that compare my desire to have a nice looking yard and my laziness are tipped ever so slightly to the lazy side. So, it sat there for years. Just last week I decided I could likely get the entire thing done in a weekend if I worked hard. And besides, I’ve always sort of had this “concept” of what I wanted to do with the space (build up some berms down the sides and make a faux dry-creekbed with rock down the center). So, overcoming the years of do-nothingness, I finally forced myself to do some work by ordering two and a half yard of dirt delivered to my driveway… which, if you’ve never had a huge pile of dirt in your driveway before, serves as good motivation.

Friday I came home early (half-day) to get started. I moved the huge pile of mulch onto some tarps I set out for the purpose, and began hauling dirt by wheelbarrow to build up the berms. I worked until dinnertime. Saturday I was out early shopping for plants, and worked all day again moving dirt, planting, picking up rock and building the creekbed, and running drip. Sunday I finished up. Below is the final project, still with some mulch on tarp in front because I’m not quite done with the pile. Looks OK to me! 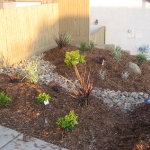 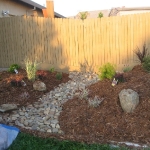 Also on Sunday, Keaton and I planted the garden when she got up from her nap. I poked the holes in the dirt and she dropped in the seeds. She seemed to have a good time. Maybe next year she’ll actually “get” the magic of the seed-to-food thing, that’d be cool.

Man, I know that was boring, I’m sorry. Sometimes I just write about whatever. That was one of those times. I guess that’s what blogs are good for. Or, bad for… whatever. I guess I’m done for the evening, I have nothing better to offer. Maybe something funny will happen around here tomorrow.

One Reply to “yardwork”