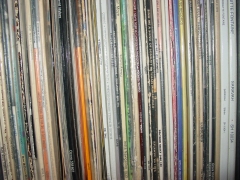 Ahhh… listening to the Band’s live rendition of “It Makes No Difference” from the Last Waltz album; I absolutely love this song. Makes me feel good each and every time I hear it, even if it is somewhat of a sad-sounding tune. Keaton went down early (she woke up late last night with a high fever, ran a lower one all day today, and actually asked to go to bed) and Sharaun’s at volleyball – so I’ve got the place to myself. That means writin’ time.

The other day, my brain tickled by the triumphant return of Demonoid to the torrent scene, I was thinking about how prevalent “discography torrents” have become over the past year. For the unfamiliar, a discography torrent is simply a massive zipped archive of every recording an artist or group has done over the span of their career – albums, singles, extras, whatever – all MP3ized, packaged, and presented as a single one-fell-swoop download. The availability of these all-inclusive super-easy-to-get packages of music makes me wonder about the future of file sharing.

I’m betting that the whole “thrill of the hunt” aspect of music collecting which has, in addition to a genuine love of music, always fueled my lust for tunes, will more than likely be a thing of the past by the time Keaton’s generation begins filing up iPods. Just look at the history: As the internet pipes have become fatter over the years, we’ve moved from single-song-hunting via Napster to album-jacking via Kazaa to discographies through BitTorrent. Eventually, you’ll just be able to click on the70s.torrent and be done with an entire decade’s worth of music in one overnight download.

I don’t even want to think about when Keaton’s kids get old enough… they’ll probably be able to buy a credit-card thick device from the corner market in Shanghai that comes pre-loaded with the entire history of recorded music. Where’s the fun in that? Part of being a music collector is reveling in the far-reach of your collection, touting the stuff you have to other collectors, having one of only five copies of that lost acetate recording of the Velvet Underground’s freshman LP – elitist stuff like that. That’ll all be over when any Joe Topforty can buy a “The Complete 20th Century” MusiCube at Radio Shack (which by then, as technology marches ever on, will have been forced to re-brand as something more “now,” like VHS Shack, or something similarly thirty years behind the curve).

Changing subject, but continuing the “I was thinking” theme… I was thinking today about how I’m happy with the amount of outside-the-house socialization Sharaun and I do – even with Keaton. Before we had Keaton, we’d get good-natured ribbing from our friends about the “end” of our social lives, though neither of us really worried much. In my opinion though, we’ve integrated Keaton well into our social circle. We bring her along, include her in the hangin’ out (much to the thrill of our no-kids-havin’ friends, right no-kids-havin’ friends?!), and often put her down in her Pack N Play when we’re over at friends’ places past bedtime. She’s a seasoned pro at being woken up for a ride home in the carseat.

What got me thinking, though, was my mom asking me if she needed to get Keaton some kind of bigger sleeping accommodations for our upcoming trip to Oregon over Mother’s Day weekend. My answer was “no,” but it was the first time I’d really entertained the thought of her outgrowing the Pack N Play. Not that the first thing I think of when I consider this milestone for her is our social lives, but… what the heck are we going to do when she doesn’t “fit” in that thing anymore? Is that the “lives over” point that people are referring to?

My answer: Nahhh… give me a break. Since our idea of “going out” is typically dinner and a movie or game at someone’s place, it’s not exactly like her sleep is at risk for interruption by the thundering bass of a club or gunshots at an out of control Latino block party (that sounds racist… is that racist?). All she has to sleep through is the “wildness” of a few thirtysomethings who’ve had a glass of wine or four, who might get too loud discussing while discussing their Roth IRAs or the Earth-ethics of local-grown produce (we live in California, remember?). I’m confident babygirl will be just as accommodating as she’s always been, and continue to be the great sleeper she is. But man… I bet it’s an interesting transition.

Before I go, I’ll repost this week’s You Decide Friday poll again tomorrow as a last reminder – but should you want to vote before then, you can simply scroll down the page to Monday’s entry and cast your vote there. I’ll close the poll around noon on Thursday.

PS – Oh hey, Megan posted some new candids of my girl!  Check it!