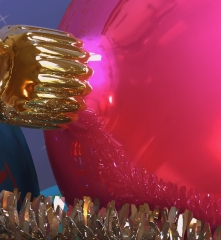 Bad news this threatening-to-rain Wednesday evening, folks: For the first day in a while, I’m not really in a huge writing mood.

I’m not quite sure what this might mean for today’s entry yet, but clearly it doesn’t bode well. Lately it seems like I’ve no shortage of things to write about or work on here at the blog, and I seem to be sailing through even the most voluminous entries with ease (note: voluminous != good, necessarily). I guess it had to dry up at some point, maybe tonight’s the night. I guess it could be good prep for the bumpiness that’ll likely lie ahead as we travel the next couple weeks.

All day at work today I kept catching glimpses of the little weatherbar plugin in my Firefox window, which was saying it was going to rain tomorrow (60% chance). That, and the fact that the lawn was overdue for a cut, meant I was out mowing right after work today so I could beat the showers. I hate mowing right after work, it’s like coming home from work to do more work – and I hate doing work after work. Actually, that’s not entirely true – because I sometimes enjoy working after work (as long as it’s not on work stuff), I just need time to decompress, to transition from “work” to “home.” Usually, I get this time with a Newsweek magazine (I haven’t always been as learned) in the crapper – the one place and activity where I’m unlikely to get interrupted. Locked there in my stinky little coffin reading about politics or the Middle East (Newsweek has a huge hardon for both), I transition. Anyway, I’ve gone off topic… what I meant to say was that I mowed, and sweat, and subsequently showered. Now I clean with greenish fingernails, typing.

Today I booked our Thanksgiving trip back to Florida. Usually, this would be a Christmas trip… but we decided that this was the year we’d start instituting our own “family” Christmas traditions. After all, we are some kinda family or something of our own now – I think. It feels odd, really, because we’ve been going to Florida for Christmas nearly every year since we moved here to California (save the very first year, when we were simply to destitute to do so). In fact, spending Christmas in warm, sunny Florida with Sharaun’s family and our friends has become a tradition I look forward to. A while ago, however, Sharaun and I both agreed that we’d like to start doing “our own” Christmas thing eventually – and this year seemed like a good time to start.

Originally, my motivation was Keaton turning two – and now requiring a full-fare ticket for the round trip flights. But, that really doesn’t hold up to much scrutiny, as we’ll still be going to Florida at some point (or several points) during the year. So, I guess it just comes down to wanting our own thing. Anyway, we’ve sort of traded off holidays – and we’re headed back this year for Thanksgiving instead. Actually, we’ve invited my family down here for Christmas this year… so who knows, maybe that’ll turn out to be part of our “thing.” Or, maybe we won’t have a “thing,” and will be nomadic Christmas transients instead… that could be a “thing.” What the heck am I on about?

Before I go, today’s the day the new “You Decide Friday” poll closes, so cast those last votes and let me know what I have to write about tomorrow night. Oh, and I promise I didn’t upvote anything… if you’re curious about the ungamed results, “When we used to go hoboing” has six legit ones, while “The first time I got a girl to take her pants off” has a mere two which are “real.” The other two each have zero… which means that… duuude… eight people? I spend way yonder too much time on this thing…

I dunno what to do with that… maybe write about hoboing? Maybe not. Maybe both… but that’s a stretch. What do you think?

Either way, here the poll again. What are you waiting for, g’head, do it:

Well, turns out I didn’t have any issues filling this page with stuff again. Guess I was wrong about that. Goodnight.

One Reply to “starting our own “thing””