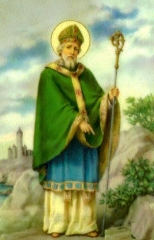 Monday night and, despite my best intentions, I ended up at the bar for St. Patrick’s Day after work instead of home in the garage repairing my downed shelving. It started out as an innocent non-commitment to some friends at work. You know the kind, where you say to your encouraging buddy, “Yeah, I dunno, maybe I’ll swing by after work – I’ll let you know.” Most males know this for a fancy-worded version of, “Nah, I’m gonna pass, but I’ll patronize you with niceties anyway.” It’s understood, you could go, it’s entirely feasible – you just won’t. Occasionally, you’ll be challenged on these non-commitments, and it’s then that you have to decide where your loyalties lie.

For me, and tonight, it was an easy decision: Sharaun was at her pregnant teen-moms thing, and she’d taken Keaton along (man, I hope Keaton doesn’t learn anything from those teens…), so I effectively had a kitchen pass until around 9pm. Even though she’d bought a rotisserie chicken for me, and left me handwritten instructions on the various sides I could make for myself (salad: tomatoes and cucumbers are in the bottom drawer; au-gratin potatoes: the box is in the cupboard; and garlic rolls: they’re frozen, bottom shelf of the freezer), I decided to instead join the crew at the brewpub for a drink to the patron saint of Ireland. I spent about $15 on beer, $13 on a dinner of shepherd’s pie, salad, a side of potatoes, and bread (starch-laden, just the way I like it).

But, I did manage to make it home by 8:30pm so I get to see Keaton before she goes to bed… and that’s where I am now: Sitting on the couch typing while I await the arrival of my family. I even sliced off some of that (now cold) chicken and ate it, just so all my wife’s efforts to take care of her poor helpless lout of a husband in her absence weren’t entirely wasted. The chicken was good, and I’m able to listen to the iPod a little too. So, in all, it was a a good evening – even if I didn’t lift a finger to get the garage shelf (and all its contents) up off their pile on the floor (which, incidentally, happened to fall right on top of our other garage-pile, making some kind of stunning super-pile – read yesterdays’ entry if that doesn’t make sense).

Well folks, that’s about all I have. But, in closing, I just wanted to share an image I received in an e-mail from a dear, dear relative – one who believes all Democrats are direct spawn of Satan, and only Republicans can get into Heaven (I’m not sure she really believes this, it’s just a comedic device – and, really, I do love her… for-serious-real). This was attached to a long mail about how President Bush is the Second Coming of Christ or something (read the thing here, if you’re interested – but note Glenn didn’t really say it all), but it was so good I had to share it all by its lonesome: 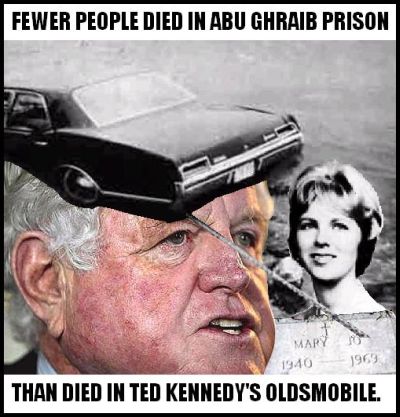 See, all the hubbub over that Abu Ghraib business was totally overblown, because… I mean, when you put it in context… look what Kennedy did. I was all like… wow…