Thursday and I knew this weather couldn’t last.

The little weatherbar at the bottom of my FireFox window says there’ll be rain tomorrow, and today was cool and cloudy. Something in me must’ve known, because, even though I pulled the cover off the barbecue, I didn’t pull out the patio set umbrella, seat cushions, or hammock. But, I won’t be daunted. I still fired up the grill tonight to cook some tri-tip for the Lost crew (yes, we get together to watch Lost… we’re some kinda nerdy).

The tri-tip ended up a tad overdone, and Sharaun ended up mad at me for cutting her good pan (or something), being a lecherous drunk, and breaking one of our good wine glasses. I conceded two out of the three and apologized, but I thought I had a defensible position on the third and I stood my ground. Anyway, it was a good night, and I had a good time with our friends. Let’s do this blog thing now.

Today on the blog, I wanted to debut something new I wanted to try. In an effort to battle bloggers-block, which is something I’ve been known to suffer from at times, although not lately I think, I sat down the other day and tried to come up with ideas for new content. And, while I didn’t come up with anything Earth-shattering as a deep well of new and exciting material, other than the standards I draw on now, I did think of a what might be a novel concept for driving content. The idea is something I want to try calling “You Decide Friday.” What this means is, occasionally, I will try posting a poll at the end my regular entry. In the poll will be a few topic ideas I’ve pre-populated, and users will be able to add their own ideas (I think, we’ll see how that works out). The idea being that I leave the poll open for a couple days and let folks vote on what they’d like me to write about the coming Friday.

I dunno, I think it could be fun… if I can get participation. Regardless, since it’s just a thought I can scrap it if I’m unhappy. So, that being said, today I’d like to present the first “You Decide Friday” poll. Use the voting options below to tell me what you’d like me to write about. You can choose from my already-populated ideas, or suggest your own (everyone will be able to see and vote on your suggestions). To add your own suggestion, click the “Add an Answer” link, type away, then press “Vote.” And, for those wondering, yes – you can indeed cheat by deleting your pharaohweb.com cookies (I didn’t enable the fancier anti-cheat IP logging because it’s kinda crappy for folks who share IPs – all the people I work with). But, don’t cheat, OK? Thanks.

What are you waiting for, start telling me what to do around here: 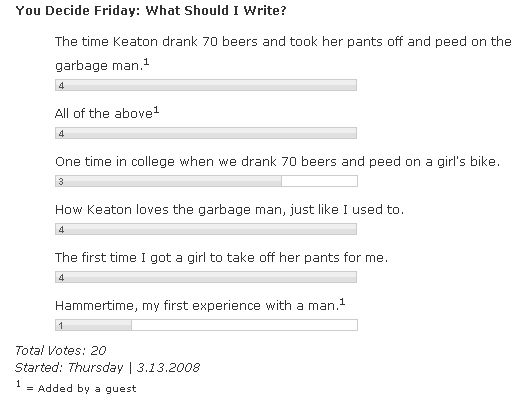 Changing subjects: Today I woke up feeling like Beatles, and decided to blast Sgt. Pepper on the way into work. With the windows rolled down, the drive was chilly… but it was worth it to let the world know that I 1) have amazing taste in music and 2) am not skittish about sharing that taste with them , you know, philanthropically, as a way to culture them a bit. As the familiar songs threatened to burst my eardrums, I couldn’t help but smile. When “Getting Better” came on, those initial guitar stabs nearly brought tears to my eyes. See, once upon a time, something happened to me in the backseat of a car while that song played, and I’ve never been able to get the memory and the song disassociated from one another. It’s not a bad thing, really, the feelings that swell up when I hear those first strains of rock and roll are nothing less than joy and ecstasy. Look, I’ve even written about this before… some four years ago. Wonder how long I’ll be able to almost perfectly call up those feeling and emotions when I hear that song… is that a lifetime thing?

Well, that’s it for tonight friends. Be sure to enjoy your weekends, I’m gonna do my best with mine. Until Monday, goodnight – and don’t forget to vote.