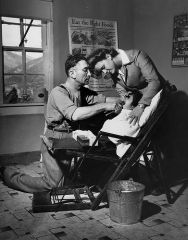 Greetings from a sore-muscled Sunday evening… late evening, at that.

I attribute the sore muscles to the rather minuscule amount of manual labor I did over the weekend while working to repair the fence we lost in the storms over a month ago. Saturday, after my Spring-inaugural lawn mowing (first of the season), I tore down the four sections of fence hanging on busted posts. Erik and Pat stopped by for some assistance yanking those huge cement teeth out of the dirt, with some help from the Ford and a nylon tow-rope. Sunday I cleaned up the post-holes and set the new 4x4s (pressure treated this time, not like the cheap-out stuff the builders used) in cement, Sharaun helped hold the posts level while I cemented. And, while we still don’t have a fence at the moment, we’re on our way… sore muscles and all. Seems like I need to get a little bit more done with these muscles, their protests at such a tiny amount of work are fairly embarrassing.

Other than that, we had to cancel Keaton’s birthday party at the kiddie-gym place on Saturday because she’s sick. When I got home from work Friday (a little early, around 4:30pm) she was still down for her nap. The noise of the garage door and me coming in must’ve woke her, and she was babbling by the time I walked by her door. When I went in to get her she was just burning up, the thermometer showed 104°. We stripped her down and put her in a cool bath to try and make her a little more comfortable, and started the regimen of Tylenol she’s still on today. She kept the fever through the weekend, although never as high as that afternoon, and has a nasty cough, a horribly runny nose, and nice gooey eyes. Sharaun, having become quite good at armchair diagnoses, predicts the doctor will call it a double ear infection when she takes her in tomorrow. Poor little thing. Kids get sick a lot, it seems.

Getting right back on the horse-ishly though, Sharaun’s planning a do-over on the party for next Sunday, hopefully she can pull that off. And, we ended up having an OK evening anyway when some friends stopped by with their brood and I got to give the grill its first post-Winter workout (salmon and asparagus). So, despite the canceled party we ended up having an OK day, and since Keaton never really acts sick, even when she is, she appeared to have an OK time too.

Alas, I know, I’ve returned to the standard play-by-play, unable, for now, to get back to the weird-style phase of writing I went through last week. Maybe it was something about Sharaun and Keaton being gone… mind wandering and all… I’ll see what I can do, but only after tonight… because… for now…

I’m done. Goodnight friends and lovers, I love and friend you all.