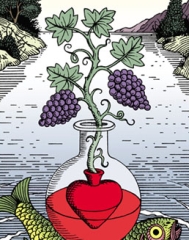 Well, it’s 8pm on Wednesday night and I’ll be leaving for the airport in about 30min to retrieve my wife and daughter. At long last, our family reunited. Sharaun’s feeling better, but not 100%. She called from Chicago during her layover, and I heard Keaton in the background playing in a rocking chair. Taking a suggestion from a friend more thoughtful than I, I stopped off after getting a haircut today to pick up a mylar Backyardigans “Happy Birthday’ balloon which I’ll use as a welcome home prop for Keaton at the airport. I didn’t get anything for Sharaun, I hope that’s OK (that’s OK, right blog?). Anyway, I wrote just a tiny bit upon getting home from work today (I split a little early for lack of concentration). Here it is, be warned: I took license.

It’s been a thousand years or more since I bedded the woman under the sun.

I remember it fondly because our communal joy was used as the basis as a new religion, the point-infinity of zero-time in which the people of that world consider consciousness to have begun. As trees thrashed in the soil, our wrestling drove up mountains, broken and shattered peaks looming around us in the midst of our eternal ecstasy. Our fantastic perspiration dotted the firmament with a flood of salty oceans and seas. Living beings sprang forth from the union of our flesh, animals winged and legged sprouting where we brushed, budding from the rich loam of our combined corpus, pushing through that single-skin and living, breathing. The sound of our tryst established the pantheon of world-language, each rumbling low and trilling high adding depth and soul to spoken word, the genesis of communication.

Each coordinated push of our bodies establishing the regular cadence of time, the cradle of eternity, the friction of our motion warming the surface of the world and giving life to all manner of plant and flower. Beauty bloomed around us, tickling our ticklish bits as it pushed through to touch our flesh and bend to the sun of our union. The fluid results of our strained efforts being the Philosopher’s Stone, that golden egg from which all base and divine sprang and will one day return – Aqua Vitae. As breath filled the first lungs ever to breathe, some of those infant-beings glimpsed our culminating love and the imprint of that God-Union was burned red-hot into their consciousness, destined to be collectively passed down and re-interpreted throughout time, understood and misunderstood by the legacy human froth spilled foaming from our joy.

They called it the Big Bang, and they weren’t that far off.

How’s that for blasphemy? Goodnight and happy Lent.