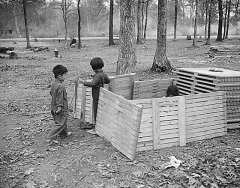 Well, at least to this man’s heart, on this night, it is.

Keaton had a friend drop by for a few hours this evening. At one point, he was pulling around Chicken Dance Elmo in the little wagon while Keaton followed close on his heels wheeling her baby doll in the stroller. They’d circle their little procession around the living room room a few times and then head for the front room. On their way Keaton would shout, “Going to our house!,” and her friend would echo, “Our house!”

Their house, such as it was, was that little 3ft x 3ft tile-floored, three-walled vestibule area just inside the front door. They’d both cram in there with the wagon and stroller and baby doll and Chicken Dance Elmo, and be “home.” At first, Sharaun and I thought it was a fluke. But, after they did it several times, we decided they were really playing house. It was the coolest thing to watch. Where the heck do kids get this stuff?

Now I will tell a short story.

In fifth grade, our class went on a field trip to the town’s public pool. Somehow, a friend and I convinced one of the girls in our class to sneak a camera, which we provided, into the girls locker room. Her instructions, once inside, were to snap dirty pictures of a certain other girl in our class. I have no idea why she agreed to this, maybe she didn’t like the other girl. The boys and girls split and went to their respective rooms to change into swimsuits, and we were jumpy with anticipation. When she finally did return the camera, we hung on her every word. “Yeah, I took some,” she said passively, as if this weren’t the successful culmination of every fifth-grade boy’s best-laid plans. I don’t remember how we got the film developed without involving the folks, but we did. In the end, our mole only managed to take a single picture, which was extremely tame and unsatisfying, but which I still have to this day. Sorry Kristina, I was in fifth-grade-love with you, it’s what we did.