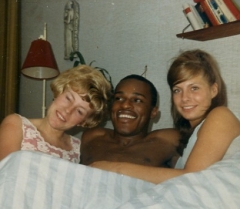 Happy Friday folks. Seemed like a fast week, didn’t it? I spent my fettered time at work, working; and my unfettered time at home, having a lot of fun playing with my new iPod. Been enjoying loading loading it up with stuff I couldn’t (or wouldn’t) afford the disk-space for on my old model. So far, I’ve been working on adding a hand-picked selection of top-shelf bootlegs. Things like Dyan’s Guitars Kissing the the Contemporary Fix, Harrison’s Beware of ABKCO, and Hendrix’s Raw Winter. I’m already sitting at about ~10GB above my old ‘Pod’s capacity…

Know how I know I’m old? Check this out.

The other day, on the way to work in the morning, I stopped off at Chevron station nearby my house to gas up. I tend to stop at this particular Chevron often, as it’s close to the house and lies on my home-to-work route. While standing outside in the grey morning cold pumping petrol into the Ford, I noticed a station worker scurrying around the pump area in a hunter-orange vest with reflective green accents thrown on over his sweatshirt. He was busy picking up trash, emptying bins, and just doing a general “checkup” of the pump station area. I took notice, in part, because I realized that it wasn’t the first time I’d seen an attendant doing such a thing at that station. In fact, as I began to think on it a little more, and take a closer look around the station grounds, I began to notice that this particular Chevron station was actually quite nice: the pumps are never broken, it’s always clean and functional, the ads and posters and flats pitching carwashes and Techron and Chevron credit cards are new, clean, and relevant, etc. I started thinking about how, as gas stations go, this one was actually pretty nice.

Now, this is the part where I realize I’m old.

When I got to work around 8am, my pleasant Chevron experience was still fresh in my brain. Without really thinking, I found myself directing Firefox to the Chevron page, and looking up the e-mail address for customer feedback. And, again, before I could really stop myself, I had written a three-sentence piece of unsolicited, positive, encouraging, feedback to Chevron. Apparently, as old-age silently took over my brain and directed me in these abhorrent actions, I had also taken the time to look up the four-digit “store number” of the location I’d earlier fueled at, and called it out by name in my missive. After I “woke up” from my geriatric haze, I’d realized what I’d done and immediately logged onto MySpace, sent some text messages, and played “the choking game.” It was close, but I was just able to reclaim the coolness of my youth.

What the heck is happening to me? Writing letters to companies? That’s something my dad would do. Next I’ll be calling senators and decrying the rampant depravity of today’s youth. I am so old.

Oh, and before I go, I’d like to clear out another half-written blog by sloppily pasting in this e-mail exchange I had the other day with Ben. I thought it was funny, maybe you will too.

So, yesterday I re-copied all the tracks off my old iPod onto my PC (mostly, to have a permanent backup). Then, I restored my new Classic to factory state, and dragged all the backed-up music onto it via iTunes. Four hours later, all the music was on my iPod. Happy, I unplugged the iPod and went to browse through Coverflow, only to be greeted with the “Choose Language” menu. OK, English.

Sure enough. There was nothing on the dang thing. I had to restore it again and re-re-copy it all over. Why do I love this flaky POS? Just because it looks sexy? Am I hypnotized into brand loyalty by those shadowy commercials?

Exactly my thoughts Dave. I had the same feeling of discontent when I purchased this, but at the same time I too am mesmerized by the slick interface. Honestly though? I have a lot invested in my iPod infrastructure. Considering both of our vehicles (Suzy’s and mine) are wired specifically for it. I’ve got cables that I’ve purchased specifically for it. We even have one of those speaker things that has a dock right on it – would be useless on another player. My iPod momentum is like an unstoppable freight train – and switching now would just be too painful. Besides, there aren’t any other players on the market with 160GB’s of space. So for now, I guess I will continue to be a loyal customer. But if this thing ever breaks, you better believe I’m going to weigh my options and start looking seriously at that Zune, or whatever else is hot at the time….

Yeah, I’m with ya. It’s in my car too, and my home stereo, and I still flat-out love the thing. Even with its DRM and “you can’t have your own music back off me” attitude, I still can’t quite hate it.

But seriously, iTunes was adding songs for four hours. I have to conclude that it was just effing with me. Four hours later and not a single file on the device. What a waste of my time. Mostly, I blame iTunes… the ‘Pod wouldn’t “eat” those songs… iTunes either never put them on, or simultaneously added and then corrupted them as it went. Stupid iTunes.

Dude… four hours is nothing. It took a full 8+ hours to transfer my tunes across my wireless network from my linux box to my laptop (which has iTunes installed) and subsequently to my iPod. I’m glad that worked the first time. And I was actually surprised that iTunes allowed me to use a networked drive.

That dang iPod. Hard to hate it.