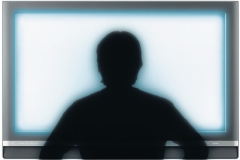 Sometimes I feel like the last guy on earth who doesn’t have a plasma/LCD flatscreen HDTV. Heck, even my parents recently upgraded to a 40-some-odd inch LCD HDTV, and they have an HD-PVR.

It still works fine. Even if Sharaun did push the power button right through the plastic housing to somewhere in the guts of the beast, where it’s been lost now for more than three years. So what if you have to use the remote to turn it off and on? And… the picture is still plenty nice, at least as non-HD goes… I mean, who cares if you have to sometimes fiddle with the analog RCA jacks in the back to get those wiggly lines off the screen? That’s just a minor inconvenience, right?

What’s more, I can even see the thing pretty darn well from all the way across the room. Sure, maybe not well enough to read the phone numbers on commercials… but who wants to read phone numbers on commercials anyway? And, I’ve totally gotten used to the little blooms of rainbow colors that my unshielded totally-not-surround-sound speakers induce onto the screen as their magnets pull a few of the bulky CRT’s weaker electrons astray. Besides, rainbows are cheery. They make people smile.

Who am I that I’m too good to use a remote, walk closer to read the fine print on that refinancing offer, demand unadulterated color reproduction, or get on my knees every once in a while and tug some wires? Seriously. When did I become royalty?

I mean, why would I even upgrade? HD is cool and all, the way you can see so much more of a football game, or how the rainforest comes alive on the Discovery Channel. But, I’ve seen HD… I know that only about a third of all programming even fits correctly on the dang screen. If you’re gonna charge me $2000 for a rectangular flatscreen TV, at least refund me the $400 for the 20% of the picture on either edge of the screen that’s blank all the time. Oh sure, “It looks fine if you stretch it.” But then all the people look short and fat, or I lose another 20% of the actual picture to cropping. I mean, sheesh! What’s the attraction?

C’mon, it’s a premature technology anyway. The Digital Television Transition and Public Safety Act of 2005 doesn’t even mandate 100% digital broadcasting until 2009. What, I’m supposed to look at peanut butter and jelly programming on filet mignon TV for two more years?

Am I seriously supposed to believe that a new 56” LCD would make my Land of the Lost DVDs look that much better? Can HDTV truly improve the clarity of Andy Griffith? I think not! Is HDTV gonna do my laundry or wash my car? No and no, I’d wager.

I might start a club: The Guys Who Don’t Care About Your Flatscreeen TV club. All that’s required to join TGWDCAYFTV is that you’re still watchin’ Three’s Company and 227 on a regular old projection fatty and aren’t ashamed to shout it from the mountaintops. It’s even OK if you go over to your HDTV-havin’ buddy’s place to watch college ball or NASCAR, we’ll let that slide. Not to mention that your membership won’t be revoked if you tend to linger around “those” aisles at Best Buy or Circuit City.. That’s really not that different from turning your head to follow bikinis on South Beach while your wife sunbathes next to you, anyway.

5 Replies to “besides, rainbows are cheery”