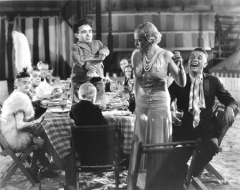 Still nursing your Turkey hangover? Unfortunately, one of the negative aspects of traveling to family for Thanksgiving is that you often have to return home without having enough time to enjoy a proper amount of leftovers. Half the reason I love Thanksgiving is because a plate of gravy-drenched stuffing almost always tastes better at 10pm the night after Thanksgiving than it ever did at the table the day before. Next time, I’m packing a backpack with dry ice and taking home some turkey, all the trimmings, and a couple slices of pie. But, we did have to leave, and now that we’re back home the trip seems like it really flew by. I guess it’s never long enough when you’re on vacation…

Walking through the airport today, I had a thought: What if I was stopped, just as I was at that moment, and asked to take a detailed for-insurance-purposes-like monetary inventory of the goods I was carrying. Naturally, I started ticking off items in my head. Laptop, two iPods (not typical, but I had them both on this trip), cash, clothes, miscellaneous electronic accessories, gold rings, and the clothes I was wearing. Doing some mental arithmetic, always off by bit at best when I’m the mentalist, I was surprised to come up with a total in the several thousands of dollars. To think that people like me are so blessed that, at any given time, they have thousands of dollars of goods on their person, while there are people in the world who won’t go through that in their lifetime. Not that thousands would necessarily make those folks any more happy, it’s just pretty amazing the amount of material “wealth” we have with us in general. I complain because my laptop bag is heavy and uncomfortable to carry around when it’s got two iPods, a book, my $200 headphones, and a couple AC adapters in it. Guess I should be thankful I’m not on my barefoot way back from the river with a yoke across my neck, two buckets of water hanging from each end.

I have so much room now, with my new Classic, that I’m having a great time decided what “new” things I can put on my iPod. I’d basically topped off my 60GB with what I thought was pretty much the best limited-to-60GB collection of tunes I could muster. But now, I can expand that collection more than 100%. Worried that I’ll end up putting some “just OK” stuff on there, and potentially pepper the “Shuffle All” feature with bad tracks, I made myself a promise that I’ll prune and manage the quality of the the new device just as diligently as I did on the old one. For starters, I’m going to load the thing up with Beatles bootlegs. Having nearly 32GB of Beatlegs in my collection, I had decided to leave them off the old iPod altogether. But, I’ve always wished I had at least a sampling loaded, as I feel like I now under-listen to what used to be a super-important kind class of albums to me. Problem is, I need to be careful about how I treat Beatles bootlegs, and for that matter, bootleg recordings in general, on the iPod. Because I have so many, I want to make sure that, between the Beatles’ commercial and bootleg releases, my iPod doesn’t get skewed too heavily to the Beatles. So, I’ll do this intelligently.

Well, sorry about all the iPod-themed entries of late… as you can see I’m having a little bit too good of a time configuring my new 160GB iPod Classic. You’ll forgive me, won’t you?

Thanks, and, see you back here Monday!