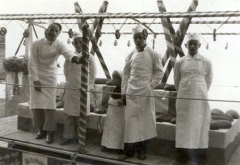 Ouch. My hips are still sore from last night’s sleep – a product of getting old, I fear. Never before did the “activity” of sleep take any toll on my person, but, with age, it seems that, on the wrong mattress, I can wake up feeling like I’d slept on a pile of rocks. It tells me that, sooner or later, I’ll be unwilling to put up with it, and be willing to part with the dosh for a new bed – but, until that day comes, I’ll keep that money in my wallet and deal gingerly with the hips that result. But, we’re not here to talk about my less-than-graceful aging… or, are we? Huh. Maybe we are, after all.

Keaton’s awake, after a long afternoon nap – she’s currently taking her books from the wicker basket I use to collect them, one-by-one, re-littering the floor I cleaned a few hours ago after putting her down. It’s been a good day for me. While not breaking the chain of sabbatical do-nothingness, I at least took a pry bar to the weakest link and made show of an effort. I mowed the lawn, something I’d been needing to do – and that needs to get done before we leave for Hawaii. I also finally got around to razing my summer garden to make way for the makings of a winter one. I tore into the viney tomato plants with gusto, sad to see them go, but amazed that the bumper crop they decided to leave me with. I pulled off a couple pounds of ripe red fruit, and paper-bagged another six pounds or so in hopes they’ll ripen off the vine (the internet says they will, and who doubts the internet?). Yes, I expended all that effort today – before noon even. Don’t worry though, I spent the next few hours lounging on the couch alternating between reading and napping. Just as it should be.

Sharaun is out picking up the last few ingredients we need to make tonight’s experimental dinner. See, while at Oktoberfest, I happened to eat a bowl of delicious “Deftige Gulaschsuppe mit Hausbrot” at the Schottenhamel tent (that’s goulash soup with house bread, for us ‘mericans). So did I love the hearty stuff, that, upon returning home, I scoured the net for a recipe that looked faithful to my memory of its awesome flavors. In time, I found a recipe which looked about right – and even had some historical text prefacing it which mentioned Bavaria and Oktoberfest. Seemed right to me, so I printed it up and asked Sharaun to give it a try. I’ll let you know how it comes out, since I know you must be keenly interested.

I swear I’m uploading pictures tonight… but until then, here are some pictures Jeff posted from our time at Oktoberfest – I think anyone can view them. Enjoy.