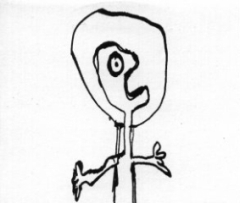 Mmmmmargggh… turning to stretch the tight knots from my neck, knots formed in the lazy contortion I’ve been holding for the past hour or so, stretched awkwardly across the loveseat reading my book. Through the window I hear the clink and clack of treaded heavy machinery, they’re busy building something-or-other new just down the hillside a bit from our place – a Mormon youth hangout… or something. Sharaun left a little while ago to do some shopping, Keaton’s napping.

As I wrote about yesterday, I made marinara sauce. I think it came out OK, but I was surprised that the near five pounds of tomatoes only yielded enough sauce for perhaps one four-person meal. At first when I saw the recipes online for freezing larger quantities of sauce demanding twenty pounds of fresh tomatoes, I didn’t believe it; now I know. At lot cooks off, after both seed and skin are discarded. Either way, I’ve got enough for a meal – I guess that’s cool.

My second goal for yesterday (today, as I write, but that’ll just mess with your head) was to “mill” some of the wheat seeds (which I also intend to plant) into flour. After some research, I decided my best bet for an “accurate” idea of what goes into making flour was to use a mortar and pestle to hand-mill the grains. Aside from setting up a donkey-powered milling stone in the backyard (a bit grandiose for my needs), I figured this would give me the best notion of the effort required. Too bad I don’t have a mortar and pestle, huh? Owell, I figure something out – and carry this “to do” onto the next day, I suppose. Anyone have an old-style mortar and pestle lying around they’d let me borrow? Let’s move on to things which are… sadly… likely not much more exciting (sorry).

Well, I must be honest: I’d have even thought I’d’ve written about it before now – but, hey, I’ve been gone. I’m referring to, of course, the whole Radiohead “LP7” revelation of the past week. Those who frequent the internet may have heard about this by now; heck, even those who still cling to ink-on-paper style information dissemination should’ve, by now, heard: Last week, Radiohead announced that their long-awaited new album, up until that point referred to by fans simply as “LP7,” but now officially titled In Rainbows, was not only complete and ready to be heard, but was to be sold exclusively (sort of, looking past the details) online. What’s more, the band would set no fixed price for the “record.” Buyers can, amazingly, name the price, down to, and including, zero, they wish to pay for the work – which, again, is available (for the time being) solely as a digital download. The news blazed across the internet, and even made the Wall Street Journal.

For me, the news was brilliant. Just returning from Germany and learning that a brand-spanking-new album by one of my all-time favorite bands of modern-times would be in my grubby little hands (or, on my grubby little hard disks, or, something) in a few days was news to smile over. For me, thought, the decision about how to obtain said work was one to ponder. The place where I “get” music now (which, as an aside, is a perfectly legal place where I trade hard-currency for musician’s hard-work…) would of course have In Rainbows available for 100% zero-dollars as soon as it became officially downloadable from Radiohead’s site. But, it seemed silly to “steal” something that the band is, if optionally, giving away.

Furthermore, I likely respect Radiohead more than most other acts around today – even to the point of giving me a willingness to pay them for their sounds. So, the decision was made: I’d go the “official” route and buy the music from their site. I decided against the ~$80 “discbox,” which would ship, in physical form, with an entire album’s worth of additional new songs sometime early December (I’ll use my favorite legal download site to obtain the extras, I suppose), and went instead with just the digital download of the material available immediately. As for price, I settled on $8 US. I entered less than half that in pounds sterling (stupid Bush), and received my confirmation code via e-mail seconds later.

And now, for tonight at least, I’m bound to this internet even moreso than than usual – as the hours tick by and I wait for my “activation code” to download the album. It’s already 4am October 10 in the UK as I write this, and the webpage says the downloads should become available sometime “UK morning” on the 10th. On a forum I frequent, someone e-mailed the webpage support address asking for a more pinned-down timeframe for the digital release, noting that “UK morning” is fairly vague. The response he received was a simple sentence of three words: “Vague is good.” Bitchin’. That is so Radiohead.

[Late-breaking Radiohead update: It’s 11:23pm and I ended up downloading the entire thing off some sharing-site link posted to a forum before I ever got my “legit” download link from the inrainbows.com site (that came at 11:40pm). The internet: it happens faaaast. Now to load on the iPod and give it a whirl as I drift off to sleep.]

3 Replies to “waiting for rainbows”