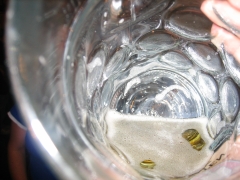 Twelve and a half hours in the tent yesterday. Twelve and a half. In an hour after the doors opened and out when they turned off the lights and security came around to clear house. It was a day at Oktoberfest, to be sure.

We arrived at 10ish and barely got a space inside (we missed the holiday opening, which was an hour earlier than we expected). But, thanks to a sympathetic waiter and a begrudgingly accommodating German and his companion, we scored a wonderful spot directly beneath the bandstand. Soon, our German tablemates forgot all about the invading American host which was our party, and by noon we were fast friends.

As the day plodded on, the room got increasingly warmer and wetter, the collective heat of near 10,000 bodies permeating the air. We marched on through liter after liter and oompah after oompah as the long hours were filled with delicious beer, delicious food, and incredibly friendly people. Some of us outpaced others, but on the whole our party consumed a staggering fifty liters of beer. For you Americans, that means the eight of us (plus our two German tablemates) quaffed a standard keg and then some.

Surprisingly, the drawn-out day aided in setting a naturally moderate pace, and combined with the food breaks, I’m happy to report that everyone walked out under their own power and made it back to the hotel safely. And yes, it was a sound and welcome sleep that took us once there.

And now, as I thumb-blog these very words, we’re back at the tents again, sitting outside this time to escape the crushing sauna of indoors, each enjoying another fine liter of helles bier.

And so it begins again.

Shawn and I rode the roller-coaster, I tried my hand at the shooting game, and we all did some shopping for souvenirs. So far then, the day is good. With today being our Oktoberfest denouement, it seems a fitting close.

Until later then, please excuse the typos, and wish us luck at the tents.