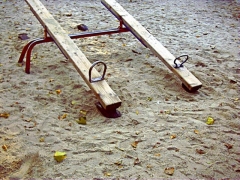 Today I had the day to myself; well, Keaton and I, that is. Let me tell you, today was “sabbatical.” My time alone with Keaton this morning embodied everything I fantasized about before leaving for this nine week vacation. I rose early and showered, prepared for the day, and bid farewell to Sharaun and our houseguests as they departed on a sightseeing trip to San Francisco. Keaton and I had made plans to go to the park, and I leisurely readied her diaper bag and stroller. After some sunscreen for her and I (a bright, overly-warm sunny day today in northern California), we set off on the mile-ish walk to the closest public park. I brought along my iPod for the trip, set on random, but kept the volume low enough to converse with Keaton along the way: “Truck!,” she’d say. “That’s right,” I’d reply, “That’s a truck!” “Plane!,” she’d exclaim. “You’re right,” I’d confirm, “That’s a plane you’re hearing.” It went on like this: “tree,” “rock,” “car,” and, eventually, “slide!”

I was the sole dad at the park, and we had walked right into a local “mom’s group” who had convened there for a “playdate.” This thing is quite common among the stay-at-homes, I’ve come to learn. At first, there was some hesitation, but soon the matrons accepted me into the fold – and we were all conversing as we watching the children play. We exchanges ages, talked about language development and diet, and fawned over the cuteness of our collective brood. It was fun, actually, and I could all of the sudden see myself perhaps enjoying being a stay-at-home Mr. Mom. Now, in reality I’m much to selfish for such a job – but it was fun to entertain the thought.

We stayed at the playground for an hour or so, sliding on slides, playing in sand, and running around in the mulch. It was on the walk back home, though, that things really began to sink in. Thinking to myself, I wondered: was it Thursday?, no, maybe… Wednesday? Ahhh… who cares anyway, look at that blue sky! Here I am, walking home from spending an hour at the park with my daughter, and I have nothing to do at all for the rest of the day. In fact, I can read my book, maybe write a little, but most of all lounge around on the couch listening to the “Deep Tracks” channel I love so much on XM. Whatever I want, that’s what I’m gonna do; Nothing, that’s what I have to do. Feed Keaton some chicken and broccoli and put her down for a nap. Man it’s a beautiful day… this truly is what sabbatical must be all about. I think it’s finally sunk in. And, friends, the real loveliness of this is that, as I sit here today, I’m not even to the halfway point. Still plenty of loafing to do.

Anyway, here are some images of our daddy/daughter trip to the park today. I took Ben’s advice and used a new kind of WordPress plugin, so the below images are kinda fancy-like (g’head, click on ’em and see for yourself). Not sure if I like it, lemme know if you have some feedback. 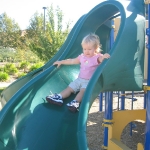 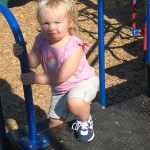 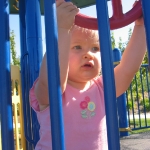 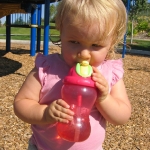 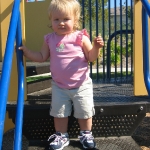 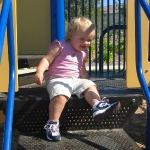 I actually think it’s pretty slick, no? Yeah, it took me about an hour to get WordPress 2.3 installed and fiddle with the new plugin. Anyway, it’s tough because it’s so sweet, but I don’t want to completely abandon my Coppermine gallery install – where all my pictures have traditionally lived up until this point. We’ll have to see how well I like this style before I decide to do any mass migration. Enough, nerd talk, yes?

I originally had another bunch of paragraphs after this one, all on a completely different topic – but decided to cut them out and use them later in the week. So, as of now, I’m officially ending this post. Peace out and I’ll holler at you later. Time to go read my book and perhaps catch a nap coincident with the baby.

2 Replies to “this is sabbatical”