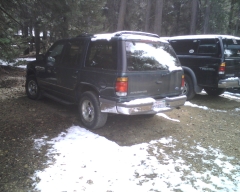 Being back at home with nothing to do, I’ve taken to sitting around reading, occasionally doing a little “housework” here and there. I do believe, in this time of having absolutely nothing to do, that the true spirit of “sabbatical” is finally starting to set in. I’m still sorely disappointed about having to call off our hike midway – but I am glad we did it, as the weather did indeed prove out our fears: with close to a foot of snow in the Sierra high country over the weekend (check out this post’s accompanying image, which was the light snow already on my car when we went to pick it up last Thursday, at only 7,000ft). We would’ve been in a spot of trouble had we been caught in that, I suppose. Anyway, we’ve vowed to try again next year – and the disappointment is waning quickly the more I sit around and enjoy that do-nothingness joy that can make a man so content.

Even the weather is changing to suit my mood. Fall moving in right on cue with rain, clouds, and a dip in temperature here in Northern California. I’ve often said, here and elsewhere, that Fall is my absolute favorite time of year – and it’s still true now. It’s funny, but, because we have houseguests from out of state staying with us this week, Sharaun went out and bought some new plug-in air freshener things – the kind with the little reservoirs of scented oil. She had cleaned up and had them all plugged in and freshening when I first arrived home from our abbreviated mountain trek, and the whole house immediately struck me as smelling perfectly “Fallish.” I’m not sure what they’re called exactly, but they smell like some heady mix of cinnamon and other wintery spices – and the scent reminds me of holidays where all sorts of tasty treats are being cooked at once, filling the air with an awesome mixture of spices and smells. Between the new smell of our house, the grey skies and rain, and my abject loafing – it’s the best Fall kickoff I’ve had in years.

I’ve decided what I’m going to do with my gardenbox for winter. I had considered all sorts of winter crops, but, truth be told, I’d like to do something a little lower maintenance (the lazy gardener, I suppose). So, I decided that I’m going to take my homemade bread fantasy to the most basic level possible, and fill the box with red winter wheat. It’s supposed to be good for the soil during the off season, it’s about the right time to plant now, and it’s a hardier variety than spring wheat. My plan involves cultivating my miniature wheat field, harvesting, threshing, winnowing, and, finally, milling it into my own flour. After that, I’d like to have make a sourdough starter with it, and eventually turn it into a real, live, rising loaf of bread. I honestly think, if none of the hundreds of things that could go wrong do go wrong, it could be a really fun experience to get an idea of just how much effort used to go into making a loaf of bread – something I ultimately take for granted. Anyway, I ordered my “hard red” winter wheat seeds yesterday, and I plan to get them in the ground after I get back from Germany, early October. I have no illusions about it being easy, but I’ll let you know how it goes.

I leave next Saturday for Germany, and, while I do look forward to the trip, I also feel just a bit sad that I’ll be once more leaving Sharaun and Keaton. I did miss them both a lot on the hike, even though I was only gone for a mere five days.

Well then, until tomorrow. Have a good week at work 🙂