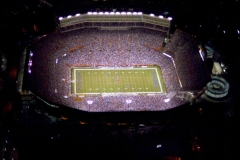 Our second full day in Florida was another nice and lazy one, spend nursing yesterday’s sunburn and still shaking out all the lack-of-sleep cobwebs from Monday. Sufficiently decompressed and recuperated, I began calling all the old buddies and relatives, setting up rendezvous later in the week for dinners and lunches and catching ups. Yesterday we hit the beach in the morning, and met up with my oldest buddies for a few pints and some mexican food in the evening – twas a good night, which saw us home in time to play with Keaton for a half hour before putting her down (having left her with the grandparents while we drank and dined).

This weekend we’re getting together with Sharaun’s sister and brother and heading up to the alma mater Gainesville to see the Gators play in The Swamp. Tyler’s gonna cart up the smoker, and we’re gonna get out on campus early for the 6pm game with a pork shoulder over some hickory. A day of reminiscent tailgating, pulled pork, and football – just like old college Saturdays. I’m actually super-excited about going to a game. It’s something Sharaun and I have been talking about doing ever since we graduated, but it’s always been sort of elusive, as I figured it would require a trip to Florida just to make it happen. Thank goodness for the awesomeness of sabbatical.

Well, I’m off to take a nap (I can do that, any time I want to). I’m about 50% done with a huge batch of pictures I’ll be uploading later this evening, if all goes right. Here’s something to whet your appetite, though. It’s a picture I snapped recently when we went to the beach, and Keaton was mobbed by the paparazzi. It happens; she’s that cute, y’know.