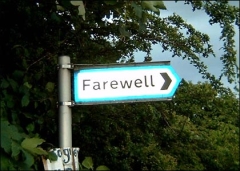 Tonight’s blog wouldn’t have happened without the wonders of the BlackBerry. I simply would’ve had no time. But, through the wonders of this excruciatingly small thumb-keyboard, I’m able to write as we wing our way southward – home. Yes, i’s hard on the thumbs and eyes, and it’s fairly slow going (although I must say, not nearly as slow as one may think, I’ve become quite speedy on this thing), but it let’s me feel less guilty about my horrid record of late. So, let’s get to the words – I wouldn’t be thumbing this if I didn’t have stuff to say now, would I?

Today was my last day seeing coworkers in Oregon before sabbatical, and with everyone offering goodbyes and handshakes and well-wishes, I walked out of that building at 5pm feeling like it was all over. Alas, it’s not; I have three more days at my home-base sawmill before I can really call it all off.

Today was a good one, though. Especially in terms of the stress I’ve been feeling lately. I worked in earnest this morning, knocking several high-priority items off the “to-do before I go” list. It felt amazing. With every clicking keystroke in the notes and missives that closed those outstanding items, I felt a weight lift. I started dispositioning new things that would go beyond the end of the week as things my unlucky coverage would be responsible for instead of me, and I archived all my in-flight work to gather dust while I’m out enjoying life.

It was a wonderful feeling, watching that normally ever-expanding list of things to do shrink but not grow; just whittle away one item at a time towards zero. I think I rally needed the confidence that seeing that list dwindle gave me; it was like a shot in the arm. And for the first time in a the past couple hectic weeks I left work feeling uplifted and excited. My thoughts for the first time turning more towards the work I won’t be doing over the next sixty-three weeks than the work I have to get done before I can go.

I was thinking about Saturday morning, that first morning, and I decided that the first thing I’ll do is wake up and put the Beatles’ “I’ve Got A Feeling” on the stereo. Why?, you ask, well, I’ll tell you. Back in middle school’ ’round about, oh, seventh or eighth grade, my best buddy Kyle and I used to convene at one of our places before clas on the first day of school. We’d come together for one reason, to listen to the Beatles’ “I’ve Got A Feeling.”

I don’t remember how we picked the song, as it really has nothing to do with “firsts,” or starting something new, and there certainly are more germane numbers we could’ve chosen, but, after a few years it had become quite the tradition. Even during our “falling out” years in highschool, I’d queue up the song solo before that first class on that first day.

I took the tradition with me to college, and even into the early morning hours before my first day on the job at my the very sawmill I trudge to each day now. I even spun “I’ve Got A Feeling” on my way home from the hospital to change clothes just after Keaton was born. It’s become a part of my “new start” ritual, some sort of ward against bad mojo, a habit that I’ve come to enjoy.

So, this Saturday, that first day of my sixty-three day weekend, I plan to take my time getting out of bed, showering, dressing, and primping – and instead head straight for the stereo to plug in the iPod and lazily head-nod my way through an extra-loud playing of “I’ve Got A Feeling.”. Yeah, that sounds absolutely brilliant.

Oh, and, before I go. The new Most Serene Republic album leaked earlier this week, much to my embarrassment, as I had no idea it was even due. But, apparently it was due, and now it’s here. I’ve loved everything this band has under their belt this far, and listening to this album these past few days at work has given me high hopes that it’s going to be another winner. So, if you can get it, get it – however you do so.

And, with every single word of this done solely from a BlackBerry on a plane, I’m out.

3 Replies to “my sixty-three day weekend”