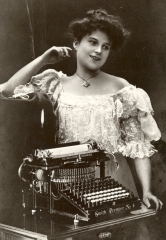 Monday night and I’ve not got much for you. My mind is wandering day and night, thinking about the nine weeks off that are just around the bend. At work, I think about drinking beer in a tent in Munich. At home, I read Muir Trail hiking diaries on the online. Between the two, I listen to music as I drive and think about lounging on the beach at Hawaii. Hopelessly given over to anticipation, it’s like Christmas at eight years old.

The new Rogue Wave leaked today and I’m sitting here listening to it, a freshly assembled pile of bits plucked from this machine and that machine, downloaded willy-nilly swarm style and magically reassembled on my end through the power of Bram Cohen. Sharaun’s at the gym and I decided to pause the episode of PBS’s History Detectives I was watching in favor of checking out some new tunes at volumes she simply wouldn’t allow. Besides, I noticed when queuing up the History Detectives that the TiVo is recording a new episode of that abysmal So You Think You Can Dance show she so enjoys, which means that’ll come on when she gets home. I figured I better enjoy some tunes while I have the chance. Man I hate “dancing” shows… Anyway, this album sounds fine enough.

About the lack of writing: I had partial entries for both Friday and Monday, but couldn’t pull it together enough on either of them, so gave up with a paragraph or two on each. Friday’s was about an unsettling experience I had at work. The kind that makes you all nervous and tweaky kinda like you know something bad is happening. This particular experience was so unnerving to me that I decided I wouldn’t be able to focus until I was able to truly clear my head of it. So, I up and left the sawmill and went home. That’s where I wrote the one or two paragraphs that I could never fill out. Y’know, the ones about the thing at work that set me off. Yeah. Monday’s entry was a half-written try at a new blog “feature” I’ve been wanting to debut, called “music appreciation,” or somesuch… I haven’t decided yet. Even with sights set so high, I just couldn’t make it happen. And, to be honest, I’m only writing a paragraph now about not being able to write paragraphs then because I need another paragraph now. Gripping, no?

2 Replies to “hopelessly given over to anticipation”