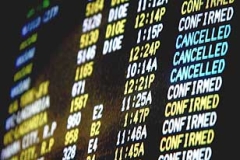 I should’ve taken the direct flight. But, no, that’s not how my brain works.

When I got to the airport today, way early, in hopes of enjoying a leisurely beer and dinner, I might add, I learned my Frontier Airlines flight had been altogether canceled (I wasn’t too excited about flying on Frontier, I had no precedent by which to judge their service, but, hey, they were way cheap and I’m out to raise the stock price at the old sawmill, y’know?).

Anyway, the desk agent informed me that she’d already re-booked me on a Continental direct flight back home to Northern California. Now, I’ve been on that Continental flight before, and it’s a sweet deal. No connection means time and hassle saved. In fact, I would’ve originally booked the direct flights to and from Houston had they not been more than double the lowest fare (yeah, Frontier…). Anyway, I should’ve taken that direct flight on Continental. If I had, I’d be in the air right now, worry-free, kicking back and trying to get some sleep or something. But, as soon as the Frontier agent told me the flight was canceled, I started thinking about miles.

I am obsessed with miles. In fact, the other day I spent a way inordinate amount of time trying to figure out how to pay my monthly mortgage with a miles-earning account. I also recently gave myself a pat on the back for “gaming” the United Visa card process, applying separately for a 1st-year-no-fee card for each Sharaun and I, using each other as the other’s referral for a total of 26k free miles; I’ll cancel them both before the annual fee sets in a year later. Again to the point: I am obsessed with miles. So, instead of jumping on the through-flight on Continental, I instead asked if there were any United flights I could get.

“No seats on United,” she replied, “‘sides, you’ll have a connection.” “I don’t mind the connection,” I said, thinking of the miles, “Do you think they’d be able to ‘find’ some seats for a 100k flier?” Now, I must admit, I was lying. I was a 100k flier a few years back, but haven’t been since. However, it worked, and she somehow located some seats which they would “probably” give to a VIP like myself. She sent me over to the United desk with a voucher thing stating that Frontier would endorse the tickets, and next thing I know I’m booked home through Denver on United. To make the rosy situation even better, I’d be arriving a full hour before I was scheduled to get in on my original Frontier itinerary. Supremely satisfied, I headed off to the gate to catch my plane.

Turns out, that United flight out of Houston sat on the tarmac for over an hour. I wasn’t too concerned, as I had ample time to make my connection in Denver, so I sat back and listened to some Bob Dylan on the iPod. When we got into Denver, it was going to be a tight connection, but it was in the same terminal and only a short walk away so I figured I’d make it – I’d just have to do a late dinner as there’d be no time in between. I hustled to my connecting terminal to find… dum dum dum: delayed. Yeah, “aircraft servicing” has : waylaid me for another hour. So, here I am in Denver, waiting for my flight, blogging on the bartop, two beers in the black, and in a pair two-day-old boxer shorts that are really starting wear out their welcome.

Hey, at least I got my miles… they do give miles for push-rescheduled flights from other airlines… right?…