That’s one long sigh of relief; in honor of my vacation. As I write, I still have two full blissful days of relaxing to look forward to. Then it’s back to work for a mere three days, followed by another full week of loafing (as more relatives come to visit). Today is Sharaun and my 7th wedding anniversary – I remembered and got a card, she forgot and didn’t. Kinda feels good to not be the negligent one.

The vacation thus far has been outstanding. We spent two nights at the cabin down south, and then had a barbecue at the house with some friends and the in-laws (got to use the BBQ again). Today, which is Monday, as a whole herd of saps are reporting to the old sawmill for another day’s slave-labor, I’m sitting on the couch with no real motivation to get going. This is a good thing, however, believe me. We’re planning to go out to the lake today, let Keaton goof around on the shore and sit in the sand. After that, our plans are… nothing. So good to be off, I’m really just realizing how much I needed the time.

I started to write last night, but gave up for lack of material. I was all ready to call it another lost day, and send the blog down what would’ve ended up being one of the longest dry-spells in its history. Then, I was checking my e-mail on the BlackBerry while I was taking my morning coffee dump (yes, I do this) when a certain configuration of bits and bytes flew through the ether, recombined into a JPEG on my phone, and inspired me. What got me going, it turns out, was a photo that my dad sent. His simple explanation was that it was an “old photo” of me that he thought I “might like.” Check it out (click for a slightly larger version in a new window): 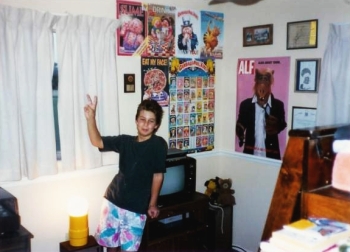 Now, to me, this picture was a treasure-trove of memories. Let’s set the stage first though, shall we? I can roughly date the picture by examining the wall decorations: We’re somewhere in the pre-Beatles phase, and still have quite a bit of post-5th-grade holdover material (the Garbage Pail Kids posters, the Alf poster). I have my TV and NES in the entertainment system, but not my VCR. The lack of Beatles material and VCR mean this picture was likely taken right around my late-7th-grade Beatles enlightenment (I would’ve been thirteen years old). I couldn’t help staring at this thing all “what’s wrong with this picture” style. Some things that I liked:

OK I’m tired. Have a good day at work, punks.

One Reply to “worth a thousand words”