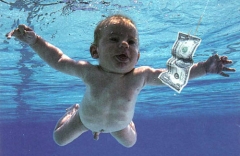 This weekend, I read an article about the baby from the cover of Nirvana’s classic grunge-flashpoint, Nevermind – he’s sixteen now. Nothing can make a dude feel old like the infant on an album he loved when he was fifteen turning sixteen. Man, that’s a bummer.

Also in the bummer department, the birds in my garden have me really exasperated lately. I’ve done a good job keeping them out of the strawberries, for the most part. Well, actually, the protective cage I built over my berries caught another winged devil today – but that’s not what I’m here to write about. It seems that, having been denied my berries, the birds have developed a taste for my tomatoes.

Over the past months, I’ve been attentively watching my larger tomatoes grow fat and plump, and have been particularly happy over the past few days (before leaving for Oregon) as they started to get some color. I knew, upon returning home, I’d likely have several large ripe ones for the picking.

However, the birds once again robbed me this glory. I don’t know how they know, but it seems like they’re tuned into my brain. It’s like the day I tell myself, “Tomorrow, I’ll pick that one, it needs just one more day on the vine,” they attack. I’ve yet to be able to pick a full-size tomato before it being ravaged by beaks. Seems I can only get the cherries off before they get to them. They’ve gone through five tomatoes so far, completely gutting them on the plant. I can’t describe how frustrating it is to tend a tomato for weeks in anticipation of literally tasting the fruits of your labors – only to have the dang thing ruined right under your watchful eyes. It may seem trivial, but I want to taste one of my own tomatoes so bad.

Writing that last sentence, I couldn’t help but feel a little empathy. For whom?, you ask. Well, I’ll tell. Imagine you work hard on something, like, growing tomatoes from seeds, for instance. You sweat and work and toil over the infantile fruits as they take shape from the dirt. You watch and tend them, pulling weeds and giving them water, making sure they have enough sunshine to thrive, etc. Then, right as you’re about to pick the ends of all your work, something comes along and steals it away.

Yeah, you know what I’m talking about. Those “farmers” whose “tomatoes” are albums. Albums grown from chord progressions and words thought up randomly, worked and reworked and polished, finally perfected and fit for public consumption. And know who I am? That bird that I loathe so much. That bird that swoops in just as the tomato/album is ripe and ready to enjoy, and glibly consumes it – with nary a thanks nor a dime. All their work and effort, pecked into bits by a punk thief with no regard for the work that went into the things he consumes.

Sorry, musicians. Maybe one day I’ll learn. Or, maybe you’ll end up shooting me with a BB gun the way I plan to take care of the birds who are “torrenting” my fruit. Seriously though, check out some pictures for the heck of it.

“Knee-high by 4th of July?” I got that and then some. From seeds too! 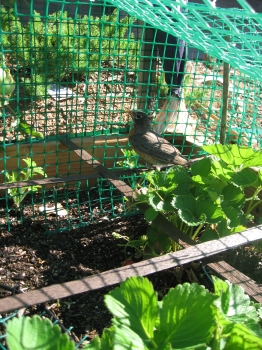 Just look at that thing, inside my strawberry cage. 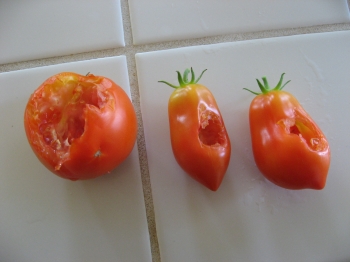 Three of the fallen, two more were too brutalized for photos.

I read online about this thin tight-woven netting stuff that you can supposedly “drape” over your plants to protect them. To me, though, draping something over tomatoes just means all the bird has to do is peck through the netting. I think, in true over-engineered fashion, I’m going to use some sort of netting to build a huge cage around my entire planter box. OK, maybe that’s extreme… but I’m open to suggestions. And, I’ll stop talking about birds and tomatoes now.

Let’s do the wrap-up paragraph now.

Got some vacation coming up next week, and I couldn’t be more ready for it. It’ll be nearly two weeks, although not taken consecutively. Vacations are always iffy for writing, sometimes they’re good for it, sometimes they’re bad for it. No promises (other than to have a rockin’ good time not-working, that is). And yes, folks, I know, lots of you have been bugging me for new pictures of Keaton. I wanted to wait until we were back from our Oregon visit before posting them, so I expect to have them up this week. Trust me though, she’s only getting cuter.

Before I go, in music news. Check out this exclusive feature on the Arcade Fire’s upcoming follow-up to Neon Bible. Also, the new Interpol has been floating around in sketchy quality, and from my first listens it sounds better than some of the other recent leaks. Oh, and, the six leaked tracks from the new Animal Collective have really grown on me. Still under evaluation: the new Thrills, the new Super Furry Animals, the new Editors, and the new Vanderslice. Oh, and, Ben got it right on his blog, the Los Campesinos EP is downright fun.

One Reply to “commiserating”