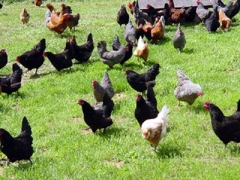 I had planned on doing absolutely nothing Sunday in celebration of Father’s Day, but I ended up going on a do-nothing bender and wasting the whole weekend on the couch. The iPod stayed on shuffle, and I napped when Keaton napped – it was pure bliss. Saturday night we pondered renting a movie, and ended up downloading a pirated cam-copy of the new “Knocked Up,” kinda like a parent’s night out – but in. Y’know, we’d’ve paid $10 to watch it on-demand, I think – if the cable and movie industry teamed up to do first-run in the home. Could be a viable business model for young parents, older folks, and the generally shut-in or social-phobic. Duh.

But anyway, Sunday morning I woke to Sharaun carrying Keaton into the room with a card in her hand. “Can you give the card to daddy?,” she asked, and Keaton dutifully handed it over. Then, I was asked what I’d like for breakfast (I requested banana-walnut pancakes, since I was asked), and it was whipped up for me while I got ready. Sounds nice, right? ‘Twas. So, let’s keep going.

Really enjoyed reading this short article online the other day, reminded me of all the roaming I used to do as a kid. Sometimes, when I recall to Sharaun some of the journeys my pre-teen friends and I underwent, she’s amazed that our parents let us be as freerange as we were. As pre-driving kids – we were borderline feral. We’d range across the town on foot and by bike, at all hours – sometimes with parental blessing, sometimes without. I don’t think the level of paranoia was there like it is today, and that was only eighteen or so years ago. I can remember being in 7th grade, which would make me about thirteen years old, riding our bikes from our sleepy little riverside burg over the the causeway onto “the island” – a long ride even by my adult brain’s standards today. Once there, we were far enough removed from our own stomping grounds to feel independent and important. Plus, there was a fireworks store there that not only flaunted Florida law by selling the good stuff (firecrackers, bottlerockets, etc.) out of small room in back, but that also had no qualms selling to kids, as long as the money was green. We’d ride the eight or so miles in the moist-furnace of Florida heat, stop at Wendys for a Frosty, pick up a bundle of ladyfingers from the secret stash in back (all you had to do was ask), and take them over to the mall across the street to light a run of ’em and toss ’em in the womens’ bathroom.

Sometimes when we’re home visiting Sharaun’s family and we drive over that causeway, I’ll look to the skinny little strip of paint-cordoned concrete on our right where we used to ride and wonder at not getting killed. Not only did we ride, we walked. I can remember, one day, having walked up to the store for kicks. While there, we’d sneakily swithed the stick-on pircetag (before UPC) from a cheap piece of beef jerky to cover the pricier tag of a “10ft beefstick,” effectively stealing it for pennies on the dollar. As we walked home, we split into groups of two on either side of the narrow lane, each holding (and occasionally gnawing on) one end of the massive meat-rope as we stretched it across the road. Seeing a car approaching in the distance, we waited until the last minute to yank our snack-slash-toy out of harm’s way. Turned out that, in that car was my dad. Here we were, four thirteen year old boys, miles from home and on foot, trying to clothesline automobiles with a few yards of spun beef – and my dad didn’t bat an eye. He slowed, said hello, and was on his way, allowing us to find whatever trouble we could as we trudged the remaining miles homeward. The independence that we felt was liberating, and allowed us to get mixed up in all sorts of shady goings-on – and I consider that independence as a key part of my youth.

Today, though, my initial tendency is to keep my kid close. I’m going to do my best, though, to afford her the freedom she’ll need to get the same kind of independent growth that my friends and I did (minus the beer, pyromania, and weed, of course).

One Reply to “teenage freerange”