Hey Monday night folks, or Tuesday morning folks – whatever the case may be. Pulled two tomatoes, one strawberry, and eight green beans from my garden yesterday. Ate the tomato and the strawberry, both were awesome, and am saving the beans until I can pick enough to make two tiny portions for Sharaun and I. There are plenty still on the bush, so I think by the end of the week we should have enough. More of the tomatoes are coloring-up though, and I just hope the things keep producing. Onward we go.

Anthony and I finished the Santa Maria style barbecue on Sunday, welding the final critical bits into place, giving it a once-over in high-temp black paint, and transporting it from his garage to my backyard. I still want to add on a few accouterments, like some hooks for fire-pokin’ tools, a raised grate for the wood/coals, some custom-fit cutting boards, and a “lid” kinda thing to place over the coals once I’m done cooking – but, it’s ready to cook on now.

Anxious to see it in action, Monday I picked up some oak at a local wood-gettin’-place. Santa Maria purists maintain that only Southern California native “red oak” produces the trademark Santa Maria barbecue flavor – but it’s just too hard to get up here. So, I instead went with a close relative, the so-called “interior” red oak of the Northern California foothills. It’s hard to judge exactly what you’re getting sometimes, as some folks refer to “mountain oak” as black oak, while some mean interior red. Things get more complicated because both the black and red interior oaks are all hybridized together in some cases. Either way, I stomped the woodyard until I found a sweet smelling reddish-colored wood called “mountain live oak,” which I think is about as close to Santa Maria Coastal Red as I’m gonna get easily here. Wow, a wood lesson.

Anyway, I set an inaugural two-log fire in the barbecue Tuesday afternoon to see how it burned, judge the heat and ventilation, and just get an idea of the smell of the particular wood I bought. Oh man, smelling that pungent smoke rise from the grill immediately took me back to my Grandfather’s back porch in Southern California. The barbecue seemed to function perfectly, and now I just have to break it in with a nice tri-tip. A

Here’s a couple pictures of the finished product. We did end up engineering a spring-tension mechanism on the crank so that the grilling surface stays put when you let go at a certain level (we even did an engineer-style nerd-test to see how much weight the springs could support before the crank was pulled into unwinding: ~30lbs). Check her out: 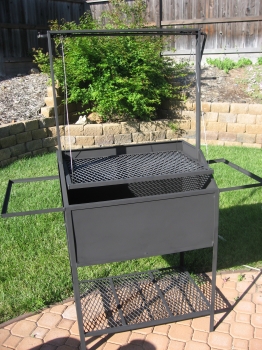 Sitting in the backyard.

Fired up as a test run.

That’s really all I had today. Wednesday I’m off to San Francisco for a day-long visit to a work-type conference – probably be back too late too blog.

One Reply to “santa maria style”