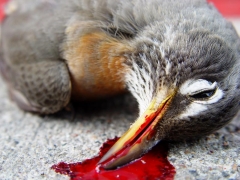 A long, long time ago, I wrote a blog wondering about how penguins “do it.” This was a genuine question on my part, albeit passed off for laughs for the blog. The question had stemmed from a curiosity that I’ve had since I was younger: Where are birds’ naughty bits? I just took it to the extreme form of bird in an extreme environment for the sake of the blog because I thought it’d be funnier. Actually, I looked it up, and it’s a pretty decent entry – you can read it too, if you want. Anyway, this is a relevant opener for my blog today – because I finally figured it out.

Today, folks – today I saw a bird with huge balls.

I got home from work around five. Stopped on the way home to see the Saigon Turtle (I love this guy now, every time he cuts my hair I just sit there and marvel silently at his backstory). And, of course, my slight OCD requires that I must take a shower post-haircutting, lest those little unseen bits of shorn mane find a way to burrow into my skin and sprout more of the evil stuff I’m cursed with (which I clearly do not need). Anyway, my dome’s tightened-up, I’m home, and I’m showered – that’s where we were.

Fresh from the shower, I step into the living room to Keaton smiling as she toddles towards me chanting, “Dada!, Dada!” My heart melts, and I scoop her up and whirl her around a bit. Then, I ask her, “Wanna go outside and check on Daddy’s garden?” Not really giving her much time to answer, I assume she does, and crook her in my arm to head outside.

And now, I’d like to switch the narrative voice here to Sharaun, and write the next sentence as I like to imagine she would recount the tale:

There. Done. Now back to me.

As I turned the corner to inspect my garden, I could hardly believe my eyes. There, inside my less-than-twenty-four-hours-old “Fort Knox for Strawberries,” was my arch-enemy: the dang bird. One ripe strawberry, folks… one dang berry. I had intended to pick it today, and was happy that the dang bird hadn’t even touched it yesterday (must have been full from eating the one that prompted Fort Knox or something). And here, flapping madly, I had my quarry penned. Keaton “oohed” and “ahhed” as we approached the increasingly frantic berry whore. I still couldn’t quite believe it, it was almost too good to be true – and my mind immediately went to how fun it would be to write this very entry. “But, it’ll be nothing without pictures,” I thought as I once again hollered to Sharaun for the camera.

A full thirty seconds went by while Keaton and I examined the trapped beastie… fruitlessly (well, depending on the definition) flapping around looking for a way out. I laughed. Sharaun finally arrived with the camera, and I edged in to get a good shot. As I did, Mr. Berrybeaks became even more agitated – obviously sensing his impending doom. He threw his winged body wildly against the confines of For Knox for Strawberries. I snapped one picture:

As I reviewed the image, I was unhappy with it, and moved closer for a better shot. Then, out of luck, Berrbeaks found a weak seam in Fort Knox and was free. You’d think, harried from such a terrifying experience, he would immediately fly fast and far away. Oh no, not that bastard Berrybeaks – that bastard has an image to maintain.

He instead flew to the fence, alighted there, glanced down at me, shat, and then casually took wing.

OK, so I made up the part about him crapping – but I bet he tried and just couldn’t make, knowing him. Alas, I only have the one picture. But, I’ve gone to the trouble to go extreme-closeup for you:

I don’t really know what I was going to do had he really been trapped and at my mercy. I’d like to think I would’ve wrung his little bird neck. But, then again, I am the guy growing delicious berries outside in full view. So, feeling incredibly defeated, I set about fortifying Fort Knox for Strawberries. I think I found my flaw, a weak front-flap opening I designed specifically for picking access. After being so handily beaten though, I doubt it will work. I guess I’m just not meant to have strawberries… dang bird.

Sharaun lost her keys again today, she called me as I was sitting down for lunch at home. Called while performing a CSI-style grid-search of the local grocery store where she and Keaton were now stranded. I asked her if she checked with the counter to see if someone may have turned them in – she had, and no one did. I asked if she’d checked the parking lot between her car and the store – she had, and they weren’t there. “OK,” I said, “I’ll be right there.” I hastily finished my food and jumped in the car. As I pulled into the parking lot I spotted her and Keaton standing around. I parked, used my key to open her trunk and loaded her bags, then lifted Keaton from her buggy-seat for a hug. Eventually, when I got to opening her driver’s side door, I ended up finding her keys there on the floorboard.

Something wrong with that girl… but man do I love her.

Wow, I’m quite proud of all the linking I did in today’s blog – I have back-references galore, huh? To me, if I was a reader, that’d be key. It’d be like getting several more paragraphs than there actually are (y’know, by virtue of the old stuff you can go back and read?). Yeah, well, I liked it.