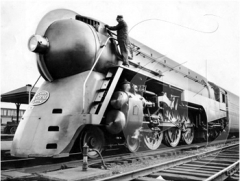 Getting started this morning at work was hard. I felt like an old car on a cold day, sputtering and wheezing my way to life… not quite firing in-time. My muscles still felt freshly tight and a little tender from my two Keaton-saddled mini-hikes over the weekend (baby + pack pushes ~30lbs), and I found myself enjoying the sensation – a physical reminder that I had successfully gotten up off my can and done something.

For a while, I feared it was a further worsening of my increasing disdain for work – but, I think my disdain remains relatively unchanged. I’m just tired of the whole business… and am ever more anxious for my two-month “respite” later this year. I can’t linger on the thoughts though, or else I’ll just get all bummed and it’ll effect the effort I put forth on the job. No, gotta soldier on and continue to perform. Man I wish I was back at that campsite, though. They really temp you with that “14 day maximum stay” sign on the way in – make me think about fourteen days spent camping, with occasional trips into town to re-stock… I think I’d actually love it.

Well, that was quite a schizophrenic paragraph.

Months ago, I decided my sneakers needed a good washing. I figured that, were I to wash them well, I could likely get quite a good bit more life out of them. Not that I’m averse to wearing dirty sneakers, I could care less actually, but I was feeling ambitious and figured I could clean them up and wear them as “new” again for a while. So, I pulled out the laces and set them in a little cup of diluted bleach to soak while I threw my sneakers into the washing machine. The shoes and laces both came out significantly cleaner, and I was pretty pleased. As I was relacing the shoes, I noticed that the little insole inserts had been jostled out of position during either the washing or the drying. I decided I’d yank them both out and try to reseat them properly. In retrospect, this decision is what ultimately decommissioned a perfectly good pair of shoes. I just cannot seem to get those inserts back in there right… they just don’t fit.

Since the washing, I’ve tried multiple times – and it just ain’t happening. After trying that morning prior to work for about 20min, I realized I had to leave and instead resorted to wearing the dingy pair of sneakers I’d retired one generation of footwear prior – I’m still wearing those today. Some mornings, as I reach for my current dingy backup sneakers, I look at my freshly-clean shoes sitting there unused and think, “I’ll try again this morning.” Today was one of those mornings. I got one shoe fit perfectly, but the other just wasn’t having it. Eventually, after another 15min of fighting with the thing – I gave up and again pulled out my backups. Looks like my backups are my defaults now… I shoulda left well enough alone.