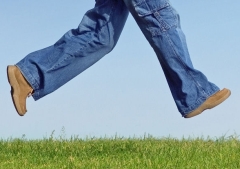 Evenin’ folks, how you doing? Me, I’m fine. After a quick jaunt to Germany, I’m back in the good ol’ USofA, where you can eat bison burgers and own guns and have two cars per family. Traveling: blah. Although, one more trip to Shanghai and the flight home to Christmas should get me to Premier Executive on United, which comes with some perks. For me, traveling for work is nothing but a skymiles chase, if not a skymiles obsession. It’s Sunday evening and we’ve got the house open for the nice breeze to waft through. The Decemberists have shuffled up in the iPod, Sharaun finished cooking pork chops and is playing with Keaton on the floor, and the smell of spices and fried meat is hanging in the air – it’s heavenly. While I was gone, Keaton decided she’d abandon crawling altogether for walking, and she’s ambling about the room with a plastered-on smile. Like I said, it’s heavenly.

Today after church, I went up to one of the local mega-ultra warehouse stores that specialize in home and garden sundries. We actually have three of these stores within a few miles of my house, just in case one 100,000sqft+ home and garden center isn’t enough for your discerning American tastes. I had to go solo, as Keaton was sleepy and needed lunch before going down, and Sharaun was in charge of that. My mission: buy some decorative landscape-type plants to adorn the mulch “planter” areas in our backyard. I’ve been asking Sharaun to go with me and pick out plants for a while now, but some sort of schedule misalignment or previous commitment has always prevented it. I got up there, got myself one of those large flatbed carts, and proceeded to wander around the garden section. I paced up and down the leafy aisles, chose some plants I liked, and cursed myself for not knowing the measured area I was intending to plant.

I hate shopping for plants alone. Every time I pick up something and think, “Hmm… this would look nice I think,” I hear Sharaun’s disapproving voice, “Oh, babe… why’d you pick those?” It can be ultimately distracting unless I’m 100% confident in knowing exactly what I want and aren’t seeking approval. Otherwise, I’m just walking around wanting to have her there to say, “What about this?” In the end, I gave up – simply quit. I had a flatbed cart with plants and I just stood there staring at it until I’d convinced myself Sharaun would hate every one of them… and I just left it there and walked away defeated. It’s not that my wife is that imposing a force, but I do want her to be happy with our yard, especially if I’m going to pour my own sweat and energy into dressing it out. To fix this, I plan on taking a morning off this week and planning a family outing to get this thing done. I mean… once I have the dang things, all I have to do is dig ’em into the dirt, right?

Unrelated – I watched this guy’s blog entry shoot to fame last week, making the rounds on all the hottest social bookmarking sites and eliciting praise from all sorts of web denizens, and I thought: what’s my one post? Do I have one that’s good enough to blow up like his did? Admittedly, he had a great story to tell… but I think some of mine are OK too… right? If you’re a regular reader, and have a favorite, drop me a line so I can add it to the list of “greatest hits” linked at the top here… OK? Thanks.

One Reply to “leafy aisles”