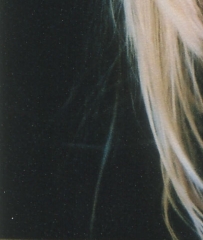 Hey, long-dark-hair girl, I know you were here. I found some of you on my carpet today, while I was down there playing with my daughter. I don’t know what you’re trying to do, leaving pieces of you around like that. Maybe you think you can tempt me away from my idyllic family-man lifestyle, perhaps into some fiery tryst with you. You may have visions of my face, framed in your lilting dark tresses, lips locked to yours. Yes, long-dark-hair girl, you may think that your devious body-part scavenger hunt has tantalized me, aroused my curiosity. But, I’m sorry to say, I’m pretty firmly rooted here where I am. I already have a girl, she has blonde hair (at least, to the eyes). So, let me be clear when I say: Your siren song may lead weaker men to dash themselves against your supple shoals, but not I. While I must admit, the brute in me wondered of you – what used to be hooked to the end of your hair: the shape of it, the feel, the smell. A well-placed gambit, I’ll allow, but I’m immovable. I crush your heart. Live with it.

Hey peoples, it’s the blog intro, one paragraph into the blog (because I can do that). It’s Thursday night, coming up on a Friday that happened faaast. The week, feeling somewhat abbreviated by the trip to Oregon, seems to be ending so soon. Today was warm, and I swear I’m not kidding when I say that all those piping hot gamma rays and that UV whatsitcalled made my fledgling garden double in size. Every night when I get home from work I go out there, Keaton on my shoulders, to inspect the day’s progress. I slowly show her each plant, naming it and pointing to it, then tell her what food we’ll eventually get from it. “This is a tomato plant,” I say, “it gives us ketchup and spaghetti sauce.” Sometimes we touch the tomato leaves and smell our fingers, the pungent smell seems to interest her.

Yeah, Keaton and I, we love that garden. It’s too bad though, that so do the ants. That’s right, I knew when I cleared the space for my planter that I had hit “ant city.” I didn’t really think much of it at the time, although it was easily the biggest congregation of the critters I’ve seen since moving out of fireant-infested Florida. I did my best to wash them away as I was installing the box, but it seems they’ve rebuilt and are now located somewhere in the depths of the earth directly below my garden. This is bad, for numerous reasons. Number one, they are already damaging plants. They’ve chewed up the fresh bean leaves. Number two, the internet says the tunnels and catacombs that are the ants’ houses below my plants can damage roots and whatnot. I gotta kill some ants, y’all! The internet says some pure clove oil mixed into a sprayer will get ’em for good without having to resort to harsh pesticides. So, to the local apothecary I’ll go. These ants must not jeopardize our harvest!

For about two days now, I’ve been listening to nothing but Yes’s Close to the Edge. An album which, until two weeks ago, I’d never heard in my life. I love it when I find albums like this; those which escaped my original rampage of discovery back in the day. Sometimes I get a little shocked, actually. How could such an incredibly radical album have flown under my radar for so long? I mean, I didn’t even really know the story of the album’s role as the cornerstone of the prog-rock movement – I was completely in the dark. It hurts a music snob’s pride, you know, to come upon albums like this. But, it also makes me glad to have found it. I tell you what, this album is amazing… even if you’re no fan of “prog,” you gotta give it up.

2 Replies to “i crush your heart”