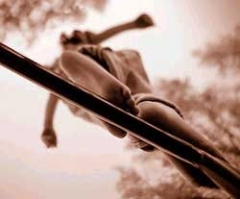 Thursday night and I’m still buzzing from a corporate-sponsored happy hour. Nice actually, considering the past couple weeks – which have honestly been a couple of the toughest weeks I’ve been through as a “manager” at a “job.” I think though, that I’ve learned more in the last few months about being a “leader” than I ever have. Makes sense actually, when you figure that I’ve not really been a recognized “leader” until recently. Yet still, going through things, experiencing them, that’s what quenches your steel – what makes you hard, what solidifies your “dick” theory. But, all that melts just a little when you’re sharing beer and greasy appetizers with coworkers – making coarse jokes about women and universally criticizing the very thing that, at work, you’re partially responsible for. Ahhh yes… the role of the buddy-manager, that tightrope, that thin line. Let’s shut up about this crap, eh?

I leave for Shanghai on Sunday morning, but tomorrow night (today’s night, as you read) we’re headed to a nice early summer BBQ with friends. I’m actually quite excited about this, the prospect of the almost-warmth of summer coupled with the fine taste of cold beer and the savory meatiness of bratwurst… oh yeah… I’m almost ready to press fast-forward and skip right to the moment Sharaun and Keaton and I arrive toting a bottle of wine and smiling. I plant to not have a headache, to not be wearing jeans that are tight and uncomfortable in the hips, and be wearing just enough clothes to be cool while the sun is up but not cold when it goes down. Yeah, I’m looking for the perfect evening – Keaton sleeping in the other room as the adults sip drinks and play cards with bellies-full of meat. Summer, you better get here tomorrow night because I need you.

Look, I’m not even emotionally invested in this show right now. I mean, Sharaun is watching it while I blog and I don’t even know what it’s called. I’m not invested, don’t care, don’t know – but I totally want this recluse guy to hook up with this elfy pigtailed girl. I love this elfy pigtailed girl, with her multicolored outfit that goes against the grain, that rails against the “matching” societal norm. She delivers pizzas and looks awesome, and I totally want this shaggy guy to go get her. Get her, shaggy guy, or I’m gonna jump in the TV and get her for you.