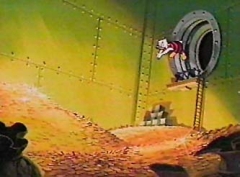 Going through this stack of dusty papers that is the mail, I found a check from our credit card folks, $5.47. That’s good money now! I figure that’ll buy me half a bottle of Mega Man; I’m out, and feeling slightly off-mega. Somewhere between aggro and super, maybe… but definitely not mega. Bought some lottery tickets today, the check more than makes up for what I spent, so that makes me feel vindicated or something. I decided to buy them because the jackpot is all jacked-up, somewhere upwards of two-hundred million dollars. Went in with a couple buddies from work. Good guys too, it’s a shame I’ll have to off them if we win. If I win, though, I’ve decided to take up writing in my spare time. Writing, and swimming in my Money Bin.

Monday night though, we had tomato soup and grilled cheese, what I like to think of as an old “hobo standby.” I like it though, Sharaun makes it sometimes when she’s pressed for time or doesn’t want to run to the store, and I don’t mind because it’s tasty and I can launch black flotillas of pepper on the surface of my soup. She was busy working on some stuff on her computer, so I played with Keaton until about eight before putting her down. Her cold is getting worse, I think. Her right eye is all goopy, collecting at the corner in nice gooey eye boogers I lovingly scoop out with my fingers. She still acts like a trooper though, with nary a sign of discomfort.

The rain continues to come in sunny California. I like it. Last night I listened to it pelt the windows and tick down the drainpipes while I waited for sleep, I had that tent fantasy again, willed it, actually. It was still coming down this morning, I used my umbrella to walk from the car into the building at work. Umbrellas, though, as I’ve mentioned before, are useless in my opinion, and every time I use one I think about how I’d rather have a nice long London-style “Mac” to stay dry instead. Like I said though, I like the rain. It makes my grass green, forces lazy days inside. I like the way it makes the streets and sidewalks shiny and dark and uniform in color, like they all got a coat of lacquer and are fresh and new. I like the sun better, though.

Gotta get to scrubbin’ folks, dishes are calling. Goodnight.

3 Replies to “we don’t care about the old folks”