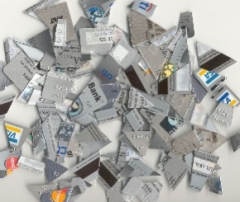 The dinner itself was so fraught with buffoonery that it was remarkable. First, our order was laughably wrong; next, our bill was incredibly incorrect; next-next, they charged my dinner to someone else’s card, his dinner to mine, and returned the wrong credit cards to each of us (of course, the other guy didn’t notice, signed his receipt, and left with my card); next-next-next, they refused to apologize or do anything other than attempt to “charge me later if the other guy calls when he notices he has the wrong card.” It was one insane example of incompetence after another, thirty minutes of it, while we were left to simply rot at our empty table. Finally, I got up and told them I was leaving, and canceling my credit card. I left them my name and phone number in case they wanted to talk about it, but stated that I planned to dispute any charge from them that evening that made it through prior to my card being canceled.

As old ladies on Andy Griffith say, “Well, I never!”

Got a bug today over lunch and went out with the weed spray to do some killin’. I also pushed the fertilizer spreader thing around to try and green-up my sullen yard. You’d think that the same lack of winter rain which has left my grass brown and crunchy would also mean no weeds. But, no, the weeds are in full bloom. It’s as if their roots drill deep into the Earth and have tapped some hidden spring, they’re always healthy and verdant, thriving even in this drought. The lawn, on the other hand, suffers miserably. I’m back to running the sprinklers in the morning to try and put some life back into it, which is something I’ve not done this late in winter (early in spring?) since I’ve had the place.

Compared to my neighbors, I’m somewhat disgusted with my lawn. Some of theirs look painted on, brilliant deep green and as thick and lush as new shag. Mine is weed-speckled and thin, whispy and here-and-there, looking on the edge of death. In the summer it usually picks up, but it’s still no prizewinner. I’m convinced that my lack of a green thumb is not to blame, but rather my unfortunate choice of lot. The corner lot, erected on a seeming bed of compacted rock with little to no soil at all in between to retain water. The lot itself a product of clearing the land above and below for other lots, a pile of crap beaten flat yet still pitched at a fierce slant, with a large burm and hollow right in the front yard. I’m convinced the grass can find precious little soil in which to root, and that what soil there is drains either too fast or not at all depending on the lay of the land. I’m also convinced the irrigation system was poorly designed. It’s an all-over mess. It’s not because I suck at things green, I promise.

May or may not post Friday, as I’m taking a vacation day and may not be inclined. Goodnight.