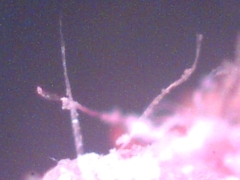 Been battling this sinus thing for more than a week now, my nose stuffs up at night and drains down the back of my throat. The snot makes its way down into my chest, and I’m still unsure what series of “tubes” in me it slithers down to get just where it lodges, but it gets there and sets up camp. Entrenched in whatever pocket it ends up in, I feel it there and am wont to hack and cough and “haaaaumpph!” it up. I stand in the shower every morning and cough and

Well, I’m now comfortable moving out of the realm of speculation and declaring that “hi” is indeed Keaton’s 1st word. Based on the context in which she uses it, and her little “hello” handwave that goes with it, I’m 99% positive she’s mimicking our own hi’s to her. I was telling Pat this weekend how, the first time I actually realized she was waving in response to my own “hi” or “bye,” it was pretty amazing. May seem simple, but to me it was confirmed comprehension and communication – it was the first time my own daughter had “spoken” to me, even though she didn’t use words (at the time), and I was thrilled.

On a somewhat related note, I was marveling the other night to Sharaun about how amazing I think it is that babies just learn how to talk. I mean, just by virtue of being around people who are speaking, their brains 1st memorize words and then start putting them together. It’s hard for me to think about learning something from complete scratch like that. It’s so different from, say, me signing up for a course in classical sculpture at the local community college. There, I’d have a teacher telling me things, a book to study from, tests to gauge my absorption and comprehension of the new things I’d added to my brain. For Keaton, though, she just learns by being immersed in it. I think about me being plopped down in the studio with a professional drummer, and doubt I’d be drumming myself in less than a year. So yeah, that she says “hi” is fairly awesome to me.

If you couldn’t tell by all my talk of “leaks” and “trackers” and whatnot, I’ve become completely engrossed with BitTorrent. And, believe it or not, I’m talking primarily about “legal” torrent activity. There are several trackers, both members-only and “open,” which enforce strict “no copyrighted material” rules and don’t accept illegal material. The better of these trackers trade only in live and unreleased material. Material previously known as, and only available as, bootlegs. Back in the day, I was obsessed with this type of material – obsessed with bootlegs. I’d pay up to $30 a disc for the rarest and most intriguing. But now, with BitTorrent, material not even available to high-dollar bootleggers (who were mostly funded by various international mafia) is all over the ‘net.

Private collectors are either getting savvy, or passing years and years of lovingly cared-for master tapes to savvier friends, and live and unreleased gems are showing up all over the place. Over the past couple months, I’ve been scouring these trackers and I’ve found some simply astounding material. Insanely amazing live shows from Neil Young, Santana, Hendrix, Zeppelin. Studio outtakes and sessions from Derek & the Dominos, the Allman Brothers band. I’m talking unbelievable stuff here, stuff that’s never been heard before, stuff that’s brand new, just unleashed on the world’s ears. And ohh… am I addicted; I’m sooo addicted. Only problem I see is when all these FLAC beauties fill up my 3/40-terabyte drive and I have to upgrade… but for now I’m just a-downloadin’ away.

BitTorrent is surely the future of filetrading, and I think it’s already bringing tapes long collecting dust on collectors’ shelves to the masses, and will only continue to do so at in increased level as time goes on. Great sites like etree and dime and tradersden, these places are doing wonders for the ease of obtaining uber-rare and exciting performances, and I’m fully on-board and keeping my ratio high for good karma.

One of the folks I work with recently brought me some honest-to-goodness saffron from Iran (yes, I know it’s illegal, but I find I enjoy it with my cuban cigars). So, tonight, I decided to try and use this “most exotic” of all spices and cook for Sharaun. I called another Persian coworker of mine to get a recipe for saffron chicken and rice. It turned out OK, needed more onions and salt, but it was pretty good. I’m actually very fond of the saffron taste, it’s super unique to me – Sharaun’s not so smitten. Anyway, I’m not sure I cooked it right – but it was quite palatable with a little salt. I don’t know, sometimes, why I write paragraphs like this… booooring…

Mischa, your fans care about you, please stop smoking.