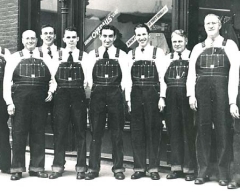 It’s now about twenty till eight on Tuesday night, and the message boards are once again alive with rumors of a Neon Bible leak before 11pm Eastern (about 40min from now, my time). These days though, with anticipation running higher than Paula Abdul on a Monday morning, everyone’s pulling the old “zOMG it leaked!!!” gag – so I remain cautiously optimistic. Ehhh… the waiting. I should know for sure by the denouement here, so let’s get down to brass tacks (what the hell does that mean?).

In the coming days you may be surprised to see some newish looking content on the Sounds Familiar frontpage. That’s right, I’ve integrated some minimal Google AdSense text-advertisements into the entry loop near the bottom. Hopefully, these won’t detract much from the glory of my writing, or pigeonhole my blog as a simple front to make ducats. I just figured, why not try and make some cash from page impressions… if I’m getting them and all, the ads are pretty non-intrusive to me, and really don’t bother me much (especially if I get a check every month). Pat joked that I’d get a whopping $2.53 a month, and he’s probably right – but I want to at least give a shot and see what happens. So, in short – I’m selling out and I don’t care. Maybe the ads’ll stay, maybe they won’t. But for now, watch for ’em.

Sometimes, at work, I wonder what it would be like if all the people I managed were me. I mean, if they were all clones of me. At first the idea seems sort of good, all moral aspects of cloning aside, because I know and trust myself to do things right. You know what they say, “If you want something done right…” Unfortunately, that’s largely true for me – I really do think I do a good job on most things, so why wouldn’t my me-cloned workforce do just as good? Maybe they would. Often times I catch myself thinking that I could do things faster and better if I just did them myself. This notion is one part asshole, one part bravado, and one part truth. That’s not to say that I’ve been unsatisfied with things I’ve owned at work before, but I knew as I was working on them that I’d ultimately be less-than beaming with pride over them in the end. I also knew I could change that, but deemed the means unjustifiable based on the ends. But, back to the workforce-of-me…

As rosy as the me-workforce may look at first glance, the more I think about it the more I realize how much it would suck. For instance, if I were managing a bunch of mes, there’d be all sorts of limitations: I’d have an entire group working to only about 70% of their potential; I’d have no way to overcome the limitations of the group (like the long ramp-time before they possess enough self-confidence to be truly effective, and their on-again/off-again motivation); and their inherent laziness and favor of flight over fight when things get unpleasant. I’d always wonder if the tasks given to them ended up falling in the 80% “give my all” bucket or the 20% “half-ass it” bucket, and worse always know that division is purely arbitrary. See, I’m an opportunistic procrastinator who’s good at hand-waving and smoke and mirrors. But, maybe, when you get down to it, every workforce is a sometimes-motivated workforce. Hell, there’s even procrastination science, check it:

Desire to Complete Task (U) = Expectation of Success (E) x Value of Completion (V) / Immediacy of Task (I) x Personal Sensitivity to Delay (D), or U=ExV/IxD

Sooo… by that logic, my desire to complete the work I was doing this morning would stackup something like this (I have no idea how to use the equation, so I’m assigning everything a value between 0-10):

I guess that means I less than half-fully wanted to do the task. Hmmm….

Lot of news around the internet about Sen. Obama’s continuing lean towards casting his lot into the ’08 race, but it’s still just a “strong maybe” as far as I can tell. The hopes of the partisan-disenfranchised moderates are running high though, as Mr. Obama seems to exude some sort of middle-of-the-road intelligent sensibilities and charisma that draws folks in. Personally, my positive feelings for the guy were based pretty much solely on his patriotic, impassioned and eloquent public speaking – but I admittedly know little about his true “stance” on many things (funny how good public speaking can make you just want to “assume” that because he seems like a “nice, logical guy” he’s got sensible positions and ideas – the power of charisma). So, I took to the internets to see what the deal is. One of my favorite sites to visit for a quick idea on where a politician stands on the issues is onthissues.org. While their site design is craptacular, their Obama page is a good point of reference. It’ll be interesting to see if he can keep the warm fuzzy going through to when then herd really starts to thin – what a job for his PR guy(s).

I read this story on off-grid.net the other day (off-grid is a great place to keep up-to-date on the whole, well, off-grid movement – which I’ve fantasized about many times before). How cool would it it be to have a machine that just “makes” water from the air? Now, if I could only figure out how to run that machine hydro-power, and using its own water for the hydro part…hey, I just invented a perpetual motion machine! Please line up to my right for Nobel Prize votes.

Goodnight. (Oh, 11pm now and still no leak. Sharaun says I’m the only one who wakes up every two hours to check… I doubt that… right?…. Want in on the fun? This blog is surprisingly “tied in.” Enjoy.)