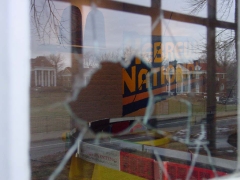 Saturday morning Keaton came down with the pukes. She returned her morning oatmeal to mom not but an hour after happily eating it, and the refused to eat solids for the remainder of the day. On top of that, all she wanted to do was sleep. Sharaun and I spent the day taking turns letting her rest on our chests as we lay or sat on the couch being lazy. I felt bad for her, as she was so obviously not herself, but a little part of me loved her resting quietly on my chest and being so snuggly – reminded me of when she was brand new. Under different circumstances, I would’ve enjoyed it – but seeing her so lethargic really bummed me out (and worried me a little, as we’ve not really seen her act like that before). But, Sunday was a new day – and she seemed pretty much her normal self. Sharaun and I figured she’d either eaten something that disagreed with her (not that we don’t know her diet or anything), or had some quick 24hr bug. Whatever it was, she seems OK now.

Speaking of Keaton, Sunday we decided to go spend all the money we’ve been avoiding spending on her. It’s time for her to get a new carseat, time for us to stop building couch-cushion forts and buy real baby-gates, and time to get some locking things on the cabinets she loves to get into. All told, we ended up spending ~$200. Kids are expensive, and you there’s little way to minimize that. It’s not like we’re making frivolous purposes motivated by want, we can’t avoid this stuff. Kids cost money, that’s for sure – regardless if you have it, they’re gonna consume it. So anyway, I worked on putting up the 8ft gate tonight (Sunday), and about twelve gnarly holes in our wall later I had it working. Of course, it’s a damn gate where I’m used to walking freely – so I can’t really call it convenient… but I guess it’s not that bad. A little spackle and spray-on knockdown later, and you’d never know how many swearwords I said during the procedure. Kids, man… they cost money.

And now, an exercise in “real” writing, just to see if I can still do it.

I used to hate people who fold the corners of the pages of books to mark their place. I always had this strange notion that books should be kept pristine, that they were valuable and deserved to be “taken care of.” For that reason, I used to cringe when I’d get a book from the library with creased dogeared corners every thirty pages or so, used to wonder at the disrespect for “community” property these people had. I know that may sound odd, coming from a guy who prizes his coming-of-age years for their social rebellion and watered down anarchy, but I that’s how I felt. Maybe it was because my dad had so many books, so many great books, as well as such a passion for reading. I somewhat realize now that my dad, much like me (or rather, I much like him), is a collector. The “what” of the collecting isn’t really that important, only during the time that “what” is the focus, really – no, it’s the collecting that’s important. Now see, I’ve gotten all off-track, and I’ve covered the my collector urges here before so – back to the page-folders.

Like I was saying I used to hate people who folded the pages of their books to mark their spot. I don’t hate them anymore, though. In fact, I myself now dogear pages in my books. Why? I think, partly, because I realize now that books are meant to be consumed, and as such would logically be subject to the same wear and tear that befalls anything that’s “used.” And, since we’re not yet in some post-apocalyptic state where paper or written history has surpassed gold in value, my concern with keeping books in “mint condition” was plain silly. Furthermore, I at some point came to the realization that owning books is somewhat pointless. For me, owning books is kind of like owning movies – it seems great to the collector in me, to the materialist in me, but in practice it’s rather wasteful and purposeless. Know how often I go back and re-read the books that I’ve bought and consumed? Rarely folks, so rarely in fact that if you were to express it as a percentage of the books I own vs. those I’ve gone back and taken off the dusty shelf to read again, you could argue that it was “in the noise.” (That’s statistician-talk.)

So, in a way, folding the corners of my pages to mark my spot as I read now makes me feel good. Who cares? Who cares if one day someone gets this very copy of this very book that I once read and desecrated? Say their friend buys it at my estate sale upon my death, and lends it to them… maybe they want to read “a classic,” or something. My folds won’t detract from the words on the page, won’t prevent them from enjoying the story – heck, at the worst they may serve as a point of confusion if this future-reader is, himself, a dogearer. But, thinking back to that disgust I once felt for the very person I’ve now become, I actually enjoy creasing that little corner; revel in my disrespect for the things I own. I mean, fuck that book, right? I’m going to buy it with money, I’m going to read it, and it’s going to gather dust in a bookcase until I die or my house catches fire or I sell or give it away. I’ll even unfold my last fold as I read through – no harm done, I care that much. So, each time I fold down one of those little corners and close the book shut to return to it later, I feel like I’m a little less materialistic, a little more “carefree.” Silly, ain’t it?

By jove, I think I’ve still got it. Now back to our regularly scheduled program.

Know what feature I want on my iPod? I want a way to have a living “smart” playlist which contains everything I’ve recently added to the device. I know, iTunes has this functionality in some capacity – but I, unless I just don’t know how to use it right, it doesn’t work the way I want. First off, realize that I’m one of those “fringe” users whose MP3 collection is larger than his iPod, I also don’t use iTunes to listen to music – so I have nothing it the “library” there – as I use the software only as a means to get tracks on my iPod. Also realize that 99% of what’s on my iPod is complete albums, I don’t typically do the one-song thing (although this the iPod itself has changed my longstanding usage model here to some degree). So, what I want is a “smart” playlist that creates a pointer to all the albums I’ve added in the last couple weeks – and I want it sortable by album, artist, song, etc. just like the standard iPod browsing menus. That’s right, I want a playlist, or perhaps subsection more accurately, that sorts just like the regular menu system but only contains stuff I’ve added in the last two weeks. That would be awesome, right? A little sub-menu showing only new stuff. I mean, it’s hard to keep up with what I’ve dragged onto there sometimes…

Still no Arcade Fire leak, just the same five tracks over and over again. Word is that promos are in the wild, so you’d think it would’ve made its way onto the information superhighway by now – but, alas, I wait still.