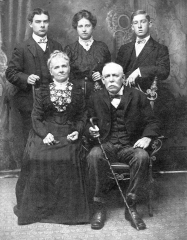 The cold weather was a fluke – we’re back to the 80s here in Central Florida and it’s nice. I’ve, of course, reverted to my standard t-shirt, shorts, and flip-flop wardrobe and am loving it. It’s hard for me to believe that we’re basically at the end of our vacation – two weeks can really fly by and I’m in no way ready to go back to work. In fact, the bad memories I left with are still fresh enough to put a sour taste in my mouth just with the thought. Ugh, but, back to work I’ll go…

Keaton showed her signs of first post-fever roseola rash today, starting off as just a bunch of spotty red prickles mainly on her chest and back. Apparently, they’ll get a little more pronounced before fading. She also woke up in a nasty mood, fussy and crying and overly sleepy as well as not wanting to eat – she was also tugging on and rubbing at her ear. Now, ear-tugging/rubbing can either mean teething or an ear infection, and I’m voting for teething and I think I attribute the general crankiness to either the same or the roseola residuals – but we’re both hoping she hasn’t somehow managed to develop an ear infection on top of her outgoing roseola. When I was a kid I was plagued by ear infections, and she’s already had one now… just hoping she doesn’t take after her dad in that respect.

Last night our little family spent the night, as we always do when we’re in town, with Sharaun’s grandmother. I actually love that pre-assigned sleepover every time we have the chance to do it. We usually sit up late talking and playing games: dominoes or Yahtzee or Uno or something, and then wake up early and have breakfast together before lazing around the house until noon or so. This visit was all the more enjoyable as it came on the heels of a day spent motoring around Florida, in the heavy Orlando traffic and back, and as such the “downtime” felt all the more down. Those times, enjoying family and friends, are among the few things which make me wish we did live closer to what I still consider “home.” Not that I would now abandon California and pull up stakes – but I do admit I wish Sharaun could be closer to her family. Then again, I wish we were closer to my family as well – so it unfortunately cuts both ways.

As a Christmas gift to a long-time buddy, and fellow music-nut, here in Florida – I spent a lot of time over the past few months ripping every last remaining CD I own, and then doing a massive re-organization and cleanup of my entire digital music library. My goal was to give my buddy a well organized hard drive filled to the brim with every single piece of music I own. And, even though it literally came down to the last few hours on the last day before we headed to Florida a nearly two weeks ago, I was able to get the files sufficiently organized, centralized, and copied over to drives. I stuck them in the pockets of my jeans, folded them, and placed them in my suitcase. Then, when Sharaun and Keaton and I went over to Bob’s (that’s my buddy) house for dinner (a fine southern meal), I gifted him with them. The next day I had a message on my voicemail from Bob, sounding more giddy than I think I’ve ever heard him, saying things like, “Dave, this shit is amazing… where on Earth did you get The Crazy World of Arthur Brown?! I used to have this in vinyl…” Make a body feel good.

Although, I will admit that there were a couple not-entirely-selfless motivations in play here: 1) to have an off-site, remote backup of my music, and 2) to receive those “why isn’t so-and-so’s album ‘whatever’ on here?” for new music leads. Either way, it was a good exercise for me in that it helped me get my collection uber-organized, and since it got Bob smiling it was all the more worth it.

I likely won’t post Monday as we’ll be in the air and technically it’s a holiday, so look for me again on Tuesday – back in the C-to-the-A and back at work chained to my cubicle. Until then, I love your shapes.