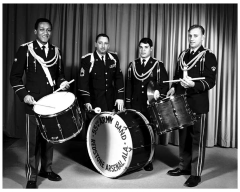 Busy busy hump day for me, lots to think about lots to do. Now I’m sitting at home blogging while Sharaun watches the M-TV and complains that, somehow, I’ve made the whole couch smell “like a giant fart.” I don’t know how that’s possible, maybe she’s mistaken the reeking foulness of this hip-hop shite on the tube for something else. Blech, will popular “urban” music ever be able to recover from the worn-out self-masturbatory mantra of sex and money?

Well, the bipartisan Iraq Study Group released its much-anticipated report today. You can read the entire thing here, if you’d like – but why do that when you can read my very own “best of” picks from the document right here? So sit back, and let me do the reading for you (or, take some initiative and read it yourself… it’s 160 pages long, but the text only covers about 30% of each page and there’s lots of fluff). Be warned, I didn’t really try to pick all negative bits… it’s just that the report is largely gloomy and there’s not much positive other than hopeful recommendations that the administration will act according to its recommendations.

On the current situation in Iraq:

The situation in Iraq is grave and deteriorating. There is no path that can guarantee success, but the prospects can be improved.

The situation in Baghdad and several provinces is dire. Saddam Hussein has been removed from power and the Iraqi people have a democratically elected government that is broadly representative of Iraq’s population, yet the government is not adequately advancing national reconciliation, providing basic security, or delivering essential services. The level of violence is high and growing. There is great suffering, and the daily lives of many Iraqis show little or no improvement. Pessimism is pervasive.

On the current level of investment and cost of war:

The United States has made a massive commitment to the future of Iraq in both blood and treasure. As of December 2006, nearly 2,900 Americans have lost their lives serving in Iraq. Another 21,000 Americans have been wounded, many severely.

To date, the United States has spent roughly $400 billion on the Iraq War, and costs are running about $8 billion per month. In addition, the United States must expect significant “tail costs” to come. Caring for veterans and replacing lost equipment will run into the hundreds of billions of dollars. Estimates run as high as $2 trillion for the final cost of the U.S. involvement in Iraq.

On the consequences if the current direction is not changed:

If the situation in Iraq continues to deteriorate, the consequences could be severe for Iraq, the United States, the region, and the world.

A slide toward chaos could trigger the collapse of Iraq’s government and a humanitarian catastrophe. Neighboring countries could intervene. Sunni-Shia clashes could spread. Al Qaeda could win a propaganda victory and expand its base of operations. The global standing of the United States could be diminished. Americans could become more polarized.

Despite a massive effort, stability in Iraq remains elusive and the situation is deteriorating.

On “staying the course”:

Current U.S. policy is not working, as the level of violence in Iraq is rising and the government is not advancing national reconciliation. Making no changes in policy would simply delay the day of reckoning at a high cost. Nearly 100 Americans are dying every month. The United States is spending $2 billion a week. Our ability to respond to other international crises is constrained. A majority of the American people are soured on the war. This level of expense is not sustainable over an extended period, especially when progress is not being made. The longer the United States remains in Iraq without progress, the more resentment will grow among Iraqis who believe they are subjects of a repressive American occupation.

Summary of the Study Group’s recommendations:

Our most important recommendations call for new and enhanced diplomatic and political efforts in Iraq and the region, and a change in the primary mission of U.S. forces in Iraq that will enable the United States to begin to move its combat forces out of Iraq responsibly. We believe that these two recommendations are equally important and reinforce one another. If they are effectively implemented, and if the Iraqi government moves forward with national reconciliation, Iraqis will have an opportunity for a better future, terrorism will be dealt a blow, stability will be enhanced in an important part of the world, and America’s credibility, interests, and values will be protected.

The ability of the United States to shape outcomes is diminishing. Time is running out.

If you read the whole thing, you’ll notice I pulled some quotes “cafeteria style” from different portions of the document, but don’t get it twisted… I’m not misrepresenting the spirit of the thing. How much must it suck for the president to read this thing, for him to be briefed on it… talk about “constructive criticism.”