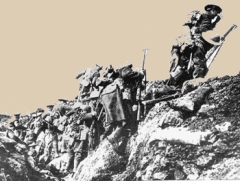 Chlorine gas is extremely toxic and deadly. So toxic and deadly, in fact, that it was used by the Germans in WWI as a chemical weapon. However, you don’t have to read a history book to “experience” it, you can make some in your shower today! C’mon, don’t be scared – I did.

Last night, I told Sharaun I’d clean the bathroom and shower if she’d do the dishes. Seemingly happy with this lopsided trade (I’d take dishes any day), she agreed and I set about plugging my iPod into the little portable speakers Pat got me as a gift to provide me with some music to clean by. I took care of the bathroom first, since it’s little more than a small closet with a toilet. Hit that with some 409 and bleach-based toilet bowl cleaner, to sparking results. Then it was onto the shower, where I decided to make a first pass at the soap scum with my old shower-cleaning standby – Lime-A-Way. If you’ve never used Lime-A-Way before, let me tell you that it’s some amazing stuff. Not to turn this into a product testimonial or anything, but my results with Lime-A-Way have been nothing short of fantastic – it making light work of even the most caked-on soap/water stains. So, I squeezed a good amount of Lime Away on the shower walls, let it drip down, and took a small hand brush to the whole thing. The scum came off with gentle rubbing, leaving the walls smooth and gleaming. Next, I used more Lime Away on the floor to remove soap scum and grime there – again with excellent results. Repeat with the glass shower doors and now all the major surfaces were taken care of.

After that, it was down to the minutiae: Where the shower walls join the floor, the grout lines tend to get extra dirty and mildewy, so I decided my best course of action there would be to trace them with a squirt of some bleach-based gel cleaner (intended to cling under a toilet bowl rim) and let it sit for a few minutes before taking an old toothbrush to them. But, before I did this, I remembered that it’s not a good idea to mix household cleaners, lest one create some noxious fumes through some unintended chemical reaction. So, I dutifully rinsed the entire shower several times with water poured from my little cleaning bucket. As a final pass, I turned on the shower itself and manually ratcheted the head around to douse off any residuals from the Lime Away bath. Thinking myself safe, I squirted a line of bleach-gel around the bottom outline of the shower and left it to simmer. I should mention that, earlier in my cleaning process, I had opened the window above the shower and turned on the exhaust fan in the bathroom, just to avoid the fumes from the Lime-A-Way alone (in retrospect, I think this was the best idea I had all night). Upon returning to the shower, I crouched down and began my toothbrush-scrubbing pass at the grout. Soon enough though, I my nose began to run. Soon, I started finding it difficult to get a decent lungful of air.

About that time, I did in fact realize that there was some chemical agent in the air which was causing me to experience these things. However, hoping it was just the “strong scent of cleanliness,” I decided that, rather than abandon the area, I’d instead pop my head up to the window and inhale a deep breath of fresh outside air before diving back down, breath held like a freediver, to finish what little scrubbing was left. I did this maybe three times before I was done brushing the grout (which, I might add, turned out spectacular), and as I finished I noticed that it was still difficult to get a “decent” breath and that my nostrils were somewhat irritated. The “smell” in the air was an acrid, burny smell reminiscent of the community pool at the Y where my brother and I took swimming lessons. I should have known, and, in reality, kinda did, that whatever traces were left of the Lime Away were reacting with the bleach in the gel – this was obvious. You can call me stupid, that’s to be expected, because I knew very well that something was amiss – yet I continued to labor just the extra few minutes to finish the job.

The next day I told Pat about my experience on the way to lunch. “You’re an idiot,” he bluntly messaged. “Yeah, I know,” I replied. “You should do some research on what exactly you did to yourself, just to know how badly you’re now damaged,” he said. And so, that’s how I ended up spending 15min post-lunch scouring the internets for some reference to the caustic results of mixing Lime-A-Way with bleach. What I learned was that, while Lime Away does not contain ammonia (which, in combination with bleach, produces chlorine gas), the combination of it and bleach is not recommended. Initially, I couldn’t find any explicit advisories against mixing the two, although I did manage to locate a couple references – which I found to be comical, and thus worthy of inclusion here – to the negative effects of combining the them.

This one, from a university’s “safety report” of on-campus injuries and/or incidents:

Description of the Incident
Employee was cleaning the well of a food warmer. The employee mixed bleach, Lime-Away and water, and the mixture released fumes which the employee inhaled. The employee had shortness of breath, cough and irritation to throat/chest.

Root Cause Explanation
Bleach and Lime-Away are incompatible chemicals and should not have been mixed.

And this one, taken from the blog of a fast-food joint manager:

I sighed. “Okay, Clueless Boy. I’m just going to ask one thing from you. I need you to fill the mop bucket for me with Bleach and hot water. Then you can go.” I continue my hurried cleaning. The water is running in the background. Then I smell this acrid scent. What is that? I start coughing. I look over at Clueless Boy. There is this cloud emanating from the mop bucket, along with the horrible smell that is making my eyes water. What is going on?

Because Clueless Boy was the second employee who tried to kill me. You would have thought he would have listened when I was talking to a coworker about the near death experience I had encountered the night before. Maybe he would have figured it out when I had the discussion with the staff that night about the dangers of Lime Away and Bleach.

You really would have thought he would have grasped the concept when I had asked him to make the signs to post on the wall, though.

Later during the day, Pat suggested that I Google “bleach and acid,” thinking he’d perhaps hit upon the nature of my self-inflicted gassing. Sure enough, there are scary internet warnings all over the place about the dangers of mixing phosphoric acid with chlorine bleach. Since Lime Away = phosphoric acid, this is exactly what I had done in my very own shower the night before. You can even read the “Do not mix with chlorinated detergents or sanitizers” warning on the Materials Safety Data Sheet for Lime-A-Way. It’s even on the bottle of Lime-A-Way itself.

During the day Tuesday, I experienced a variety of nastiness which I attributed to my exposure, including a headache, tight chest, dizziness, weird pressure changes in my ears, and upset stomach / heartburn. I’m not entirely sure if any of these things had a whit to do with my self-gassing, but considering the litany of symptoms which can arise from low-level exposure, I think I got off rather lucky either way: