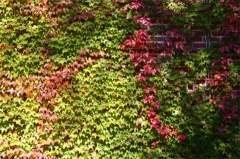 Despite unfavorable weather and seemingly interminable traffic, our family arrived in Oregon safe and sound after a 9hr drive that ended up being a 13hr drive. Yes, it was long, and frustrating to no end, but, in the end, it was worth it. A long weekend spent relaxing, reading, doting on the baby, drinking wine and eating. There’s small better pleasure than sitting inside a comfortably warm room while the cold and rain press outside, reading a book and nurturing a nice merlot buzz. It’s hard to believe, although glorious to be sure, that it’s only Friday, as I’ve got a lot of atrophy yet ahead of me before having to pack up the truck and head south through the snowy passes back to northern CA. Today it’s football and leftovers, tomorrow: leftovers and football – just to switch it up a bit.

Keaton has been an absolute angel since we’ve been here, having soldiered through the much-longer-than-intended drive like a champ – sleeping for about 95% of it (although I must admit I felt a bit like a bad parent forcing some sort of car-induced narcolepsy upon her). She’s been the picture of a cute granddaughter for mom and dad, keeping them entertained with giggles and smiles. Since we’re heading to Florida for Christmas, my folks did their gifting last night – heaping box after carefully-wrapped box on the table near Keaton as Sharaun and I tried to entice her into tearing them open. She tore, a little, but she mostly needed assistance to get to the chewy centers. When all the paper was ripped and piled around her, and we’d taken a few obligatory bow-on-head pictures, she ended up a nice cache of spoils. There was an awesome circus train toy which moves and sings, and several baby outfits which are the kind of cute that only miniature-people clothes can manage.

That should be enough for today I think. I wasn’t even intending to write. Hope you all had a good Thanksgiving and as nice a weekend as ours is shaping up to be.