Hey hey friends, I want to pre-let you know that I have next to nothing to write about tonight. In fact, before logging into WordPress and typing this I had actually planned to go entry-less tomorrow. Then, I got the vapors and decided to go for it. I’m crazy that way y’all, it’s just a part of my chemistry. Don’t leave me alone with your women, I might get all crazy and pitch woo (in blog form, of course) at them.

Tonight I got home from work and almost immediately hopped in a car with Sharaun and Keaton. Sharaun had, in an awesome display, cooked soup for an older couple from church with whom we’ve become acquainted. We headed over there and had an outstanding meal with this couple we barely know. We traded abridged life stories, theirs much more abridged than ours (by necessity,) and just sat and talked. I had a terrific time, listening to stories from a former WWII B26 tailgunner in the European theater; stories about his children, his time in the army, his various home-improvement exploits, his thoughts on aging… it was like sitting down in front of a living, breathing piece of history. Not just history though – a man with experiences, a piece of history you can interact with and ask questions. Honestly, I had an outstanding time, simply taking 3hrs to have a meal with people; to listen. Don’t misunderstand me, this isn’t the same “high” that you’d get from dishing at the downtown soup-kitchen – not a charity high. What I am beaming about is some kind of “human contact” high, some idyllic Mayberry porchswing thing. I place high value on sharing experiences with people, even if just by listening to accounts of past events. When we got home, I made sure to thank Sharaun for her selfless act of non-charity – it was a truly awesome way to spend an evening.

And now for something completely different. I have no idea quite how this happened, but last night I somehow happened to find scans online from a 1935 Santa Barbara, California highschool yearbook – one of the years my grandmother attended that very institution. Amazing, right? So, curious, I began “thumbing” through the scans to see if I could spot any photos of her. Turns out, my grandmother was quite active in school clubs and activities, and as such I was able locate her in several different group photos (apparently, only the graduating seniors got headshots, and she must’ve been an underclassman that year).

Anyway, I had already posted this blog by the time I found the yearbook after midnight – but I came back just to add this bit, so I apologize if the writing is hasty. Pretend I’m conveying all sorts of amazed sentiment at such a random online find – the only digitized Santa Barbara yearbook online and it’s the one my grandmother’s in. So, without further ado, here is a picture of my grandmother in highschool, as a member of the “Welfare Council” (click for larger versions):

But wait, as amazing as that is – want to see something even more incredible? In this particular picture, the young woman standing next to my grandmother is none other than my great-aunt. That’s right, my grandmother standing alongside her future husband’s sister in the same Spanish Club – now that’s a true internet find! Check it out (grandma on the left, her sister-in-law to-be on the right): 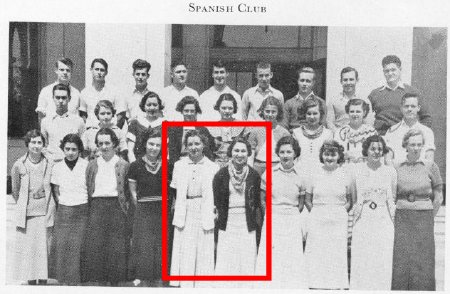 Seems my my great-aunt and grandmother were also both members of the apparently less exclusive “Scholarship Society” and “Girls’ Athletics Association,” although they’re not standing next to each other in these (my great-aunt in green, grammy in red):

That internet y’allz, that thing is wild… OK seriously, it’s like 1am and I haven’t even taken out the trash yet – goodnight lovers.