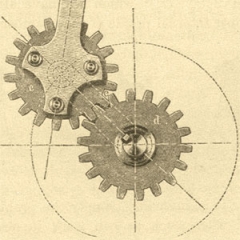 Tuesday night, almost-finished-but-didn’t the final Halloween prop, I ended up missing a few minute but crucial bits and couldn’t leave the house as I was alone with Keaton. Tomorrow it is, then, for the finished product – time is ticking though, and I’m ready to have it done. Maybe I’ll come home tomorrow at lunch and finish it off. After working on, and quitting working on, the prop, I came inside and worked a bit on December’s “Best of 2006” post a little… then stopped to take a dump… and now it’s now. Sharaun’s busy fabricating our costumes for Friday’s soirée, and I should be working on making a replacement tombstone for the one that got jacked – but I’m not… I’m just not motivated. So instead I’m listening to music.

I absolutely loved this article (and the comments are particularly good too), the seafaring metaphors make for an entertaining read, and the meat is nice and meaty. Lamenting the many IED-pockmarks in Great Britain’s road to from March 19, 2003 to now in the Iraq war, the writer makes some interesting statements – including this one:

It is no small thing to find oneself on the wrong side of an argument when the debate is about the biggest disaster in British foreign policy since Suez; … no small … to have shackled our own good name to a doomed US presidency and crazed foreign-policy adventure that the next political generation in America will remember only with an embarrassed shudder.

Anyway… remember when we hastily invaded Iraq without international backing, the administration’s reasoning firmly based on the “overwhelming probability” of WMD (despite what revisionist history may say)? Fast-forward to now: North Korea most certainly has WMD, not one nation on Earth would question that. Remember the fear that the administration whipped up on the “likelihood” that Iraq might be producing and plotting to use WMD? Where is that fear for North Korea? Why is the nation not being whipped into a frenzy this time? (More stunningly, but slightly off-topic, why aren’t people taking note autonomously… must we wait to be told what to fear and who wears black?) We’re not seeing the same fear mongering because we can’t afford it. We’re completely committed to a theater of war that is now, without a doubt, a solid loss. We fucked up, fucked up big. Invaded a country on false pretense, blowing the horns of WMD and Democracy when we were really after a toehold in the Middle East and a more secure supply of oil. Oh sure, way back in 2003 this foreign policy may have seemed logical.

But oh, my friends, where we are now. Now – it’s crystal clear that Iraq, while it was no poster-child for human rights or fair government, was no imminent threat. But, while we were busy spreading ourselves thin and spilling blood for pure lies – the world was not idle. North Korea got the bomb, shadowy extremist networks like Al Qaeda mobilized and struck in far more sophisticated plots than we imagined them capable of. And all the while, we tore down a country that was, at its most threatening, a sticky situation for international diplomacy.

Anyway, the whole thing made me wonder, when I help Keaton memorize names and dates on flashcards for her 10th grade American history class, how this war will be memorialized in the books…

Anyway, we need to get off this war crap. The big ol’ Halloween party is in a mere two days, and things are pretty much ready. My mom and dad are coming down to spend a few days with us and Keaton, and are going to help out by babysitting the night of the fête (apparently English didn’t have enough synonyms for “party,” so we jacked a bunch from the French). I’m going to try to not get too ridiculously loose as the shindig, so Saturday won’t be a complete waste. Anyway, I have high hopes for what will be our fourth annual bash – and I’ll try and get some pictures of the costumed action up sometime early next week.

One Reply to “now it’s now”