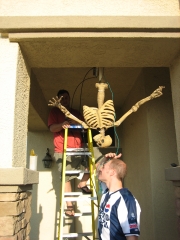 Sunday I decided to organize the garage, partly because the house was in such disarray that I wanted to clean something. We had some folks over Saturday for football, Halloween prop-building, and smoked pork butt. Borrowed Pat’s homemade smoker, woke up at quarter to four to take the meat from it’s brine, dry-rub it, and put it in. So, Sunday morning found the house a little untidy – hence my OCD urge to clean and organize. Managed to make some more room by shifting things around and moving stuff up into the rafters. I’ve written before about how better utilizing the space we have makes me feel good, and today was no exception.

Not gonna write much today, don’t have much to say. Basically, I’ll just point you over to Keaton’s gallery – which has been updated with her week thirty-one pictures. I also added back the ability to comment, although with a little captcha style confirmation code. So, comment away again please.