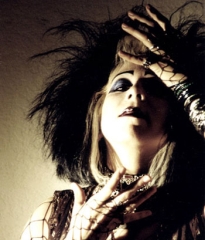 Sorry for yesterday’s lack of words, it was just an uninspired evening. I had one paragraph and figured it wasn’t worth it. Right now, Sharaun’s out and Keaton’s asleep and the Halloween prop timer just kicked on and I’m sitting here listening to Muddy Watters (sometimes run-ons just feel right, y’know?). Now Skinny Puppy’s Addiction from the 12″ collection came on, what a track. It’s a good night. Oh, and, rain either got into the coffin popper’s wiring today, or the motions sensor is shot – because that thing just started flipping out tonight… turning off and on with such rapidity that the corpse looked like he was having a postmortem seizure. I had to disable the solenoid to the pneumatic cylinder, bummer.

I have a sneaking feeling I’ve espoused on this theme before, but I can’t be bothered to look for it among the previous entries – maybe this one will be better. I think it’s funny that we’re at the time now where the Lollapalooza set is starting to settle into their married lives and have children. My idea of what parents should be was, of course, shaped by my parents. And let me tell you, the parents of my generation are definitely removed from that breed. More and more of the parents I meet today have shaggy hair and ten-gauge hoop earrings and tattoos. These are “kids” in their mid-thirties who’re still holding onto bits and pieces of the fads that defined them as youth: grunge, hip-hop, etc. I think it’s hilarious to see a dual-childseat equipped minivan rolling down the road with the Cure or Front 242 drifting from the speakers.

I realize that my personal realization here is likely not unlike the realizations of the generations before me when they stopped and noticed: “Hey, I’m not young anymore… folks my age seem to be hemorrhaging babies, getting divorces, and not being able to sit on the floor without their ‘joints getting sore.'” I’m sure that there comes a point (right around thirty, I’d suspect) in most people’s lives when they realize that their age bracket has moved to the “next phase.” I’m just at that point, and my “age bracket” makes for an interesting menagerie of a parents and children. In fact, I bet when my parents became parents, it was hard for them to imagine a bunch of thirtysomethings in poodle skirts and saddle shoes chewing Blackjack gum and raising kids. Every generation must go through that shock of “we’re not kids anymore, we’re raising kids now.” (Have I restated the same thought enough times yet?)

Booked tickets for our trip home for Florida for Christmas this morning, ended up going with United at a premium of about $150 so I could use my “class of service” upgrades and get the mileage. Sucks to pay a grand just to get home before we can even start spending money while there, but I guess it’s a lesson learned for me. Next year, I’ll be putting away a small amount each month in preparation. Anyway, I was able to use my languishing 100k upgrades to get us 1st class for the entire itinerary – which, I suppose, is some small comfort… and perhaps justifies the $150 adder. At least we’ll be flying in style, maxin’ and relaxin’ with champagne and scallops. Sigh… next up: Thanksgiving tickets. Good thing I’m stinking rich. Oh wait, I’m totally not… sigh x2.

Last night I was on one of the message boards I frequently lurk on (I’m a member of nothing, but a reader of a lot), and a well known boarder posted that he was going to commit suicide. Some boarders told him not to, lots cheered him on. I wonder if that guy was serious?

For some reason, the TiVo’s been missing more shows than usual lately (I suspect some mega-conflict with the sheer number of programs we’ve set to record). Sharaun realized it missed a show she likes, and exactly 12min later I had it downloaded and was playing it in perfect quality on the TV via the laptop. It’s times like that, when I’m “stealing” TV shows, that I really value the coolness of the internet. When I stayed in Taiwan for a month last year, I was able to watch any US TV show I wanted.