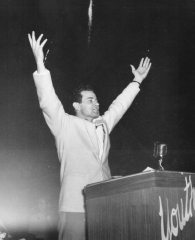 Tonight Jeff and Ben and I did run-tests on all the Halloween gear. We tested the PicoBoo’s audio capabilities, as well as it’s controllable AC timing. We tested the air cylinder and solenoid, and even busted out the mega fogger and did a test with it (I love that thing). I kinda half decided I want to try again at building a fog chiller, this time something bigger and more powerful, hopefully something that can handle the mega fogger’s action. I love Halloween, and I think this new ceiling dropper prop (which was realized very quickly from the initial concept) is gonna be awesome.

Maybe none of you eagle-eyed grammarians noticed it yesterday, but I made a mistake in yesterday’s post. For some reason, I used the word “quaff” to refer to a person’s hair. At the time, the usage obviously sounded right to me – despite the fact that I know quite well that “quaff” means a/to drink. I think I was thinking of the word “coif,” which is also wrong (means a hat/skullcap). I realized I’d made the mistake about 10min into my dental cleaning Wednesday morning, and let me tell you – it was a trial of OCD-induced suffering to sit there just knowing people were reading my blog and likely noting the complete misuse of a word, knowing I wouldn’t be able to fix it for some time. I kept thinking about people going, “‘Quaff?’ C’mon Dave…” Horror. Anyway, I changed it to “mops,” which, I’m hopeful, is still an acceptable “colorful” term for hair. (Edit: In my defense, there is an archaic use of the word “coif” as a verb meaning to “muss with one’s hair.” So, I’m still off, but closer.)

And that’s it for tonight, that’s it.

One Reply to “hallelujah”