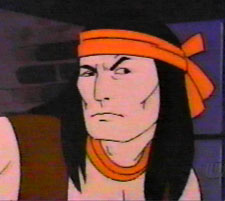 Hey, Monday’s down… spent a good bit of time this evening searching fruitlessly for decent-priced flights back to Florida for Christmas. If I let my memories get all shimmery and hear chimes, I can cast my thoughts back to years gone by when Sharaun and I both flew home for a grand total of nothing more than ~$500. Now, that’s a one-person fare. I’m not sure, but I suspect Osama may be to blame. Anyway, I gave up in a fit of wailing and gnashing of teeth as I stared bleary-eyed at the screen through my uncontrollable tears. And I haven’t even started pricing Thanksgiving, and I’m sure Keaton’s gonna want to go to college sooome day…

I’m sorry if I seem to be stuck on the politics gig recently, but there’s just so much awesomeness going on. We’ve got Woodward’s new book (which I’d really like to read) and republican representatives getting bused trawling for hot nubile gay sex then subsequently retreating to the inner sanctums of Tomcruiseology to clear themselves of those young gay thetans. There’s all sorts of awesome stuff going on in the keerazy world of politics lately; for instance, here’s a good one about our favorite Latin American Bush-basher:

This article tickled me yesterday. The opening line alone was enough to get my head wagging:

The recent military build-up in Venezuela by U.S. nemesis President Hugo Chavez has other countries in the region worried that the weapons could end up in the hands of terrorists, Defense Secretary Donald H. Rumsfeld said Monday.

U.S. nemesis?
…in the hand of terrorists?

Oh man, the message here is pretty clear: speak ill of this administration and they will, somehow-someway, associate you with their fix-all that is terrorism. I’m so fucking sick and tired of hearing things trotted as terrorism before a rapt crowd of fraidycats; grow a damn spine people. Terrorists are here, they’re gonna be here, they’re gonna kill people and blow stuff up. Let’s be reasonable, let’s not invite them in or anything, but let’s at least be rational about the whole thing. One of our original statesmen said it best when he said:

Those who would give up essential liberty to purchase a little temporary safety, deserve neither liberty nor safety.
– Ben Franklin

Sorry for the vitriol, I got a little worked up there.

Time to download some tunes, I’ve heard the new Hold Steady is good and the new Shins is purportedly leaking as I type this. Oh, and I’d like to make a prediction: The new hotness in illicit filetrading? Not members-only torrent sites, not the newsies, not any P2P app… nope. It’s anonymous upload/download “dumps” like yousendit, megaupload, rapidshare, and sendspace. I know we’re not supposed to talk about it, since it might jinx it, but if you want the new-new stuff and you’re not a member… these sites are the way to go.

One Reply to “keaton’s gonna want to go to college”