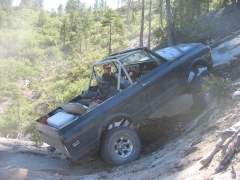 Good evening folks, Sunday nights make me sad because I know I have to go to work tomorrow. I don’t have much tonight, a terse summary of my weekend spent camping and 4x4ing with the guys in honor of Ben’s pending nuptials, and the twenty-eight week update to Keaton’s gallery.

This weekend was pure awesome. In what could’ve been a disaster, we had to scrap our original plan late Friday night due to a wildfire that had shutdown our intended destination. Whereas I had planned to pack Friday night, I ended up sitting over at Anthony’s as we poured over maps and books and websites for a new location. We ended up plotting three trail areas which were relatively close enough to each other that we could get from one to the other if we didn’t like one.

And that’s how we ended up four-wheeling around the Sierra butte country, deep-deep-deep in the backwoods and charging down paths unknown with the bold confidence that USGS topo maps and GPS can give you. We covered some 100mi+ of abandoned logging road, forest and fire service access roads, and some things I’m not even sure were ever defined roads as much as they were trails blazed by trucks before us. We didn’t do anything too insane, but we did have a few hairy descents down boulder-laden washouts and some… “accidents.” We ruined a muffler on the Rover, and wrecked the rear differential locker on the Blazer – not to mention both trucks ended up pretty scratched. (Oh, and I learned what automatic “lockers” are, what they’re for, and what they sound like when they’re shot).

We “stumbled” on an amazing campground tucked next to a river off some dirt roads, rebuilt the firepit with some large rocks, and gathered downed wood before we pitched tents and started cooking up a mess of steak and beans. Drank beer and port from my flask, smoked my pipe, and had breakfast burritos for breakfast. Some of the guys attempted to fly fish, but nothing was biting. Next day we pointed the trucks down random trails and ended up having to ford a river before we made it back to paved road. It was flat-out outstanding. I’ll have some pictures up in time to link to in tomorrow’s entry.

And that’s it. I’m beat-down tired and I’m ready to hit the sack. Goodnight.