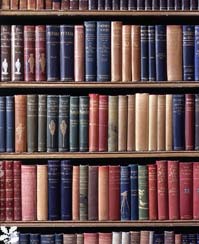 1 for 2 tonight, as I was able to get a haircut but lost the daylight before I could get the lawn mowed as I’d planned. Keaton’s officially sick, the doctor says she has an ear infection and she’s gotta take two different prescriptions. I feel bad for her, because her nose is stuffy and her eyes are goop-laden. We even got her that new ear infection inoculation too, because I was plagued with the things as a kid. On the plus side, she doesn’t act sick – she seems as happy as ever and smiles like there’s not snot on her face and boogers in her eyes.

Today I decided, on a whim, to swing by the public library. When Sharaun and I first moved to California, one of the first things I did was get a library card. I went through a period where I used it quite often, requesting books online and picking them up. That was a while ago though, and since then, I’ve let it fester. But, driving back from lunch solo today, I decided to stop in to pay my $2 and bring myself back “current.” I mainly wanted to see if they had a copy of Kurt Vonnegut’s Slaughterhouse Five available for checkout, as I’ve never read it and Ben’s recommended it to me several times. I figured I could take it along camping this weekend and maybe start reading it. Anyway…

I’d forgotten how much I love the library both as a concept and a brick-and-mortar resource. It has the same kind of socialist appeal for me that things like public transportation and open-source software do. It fits right into that “share for a common good” and “simplify” message that sings to my inner hippie. I mean, why pay for and stockpile books you’ll never read again when you can borrow them for free? The only reason I can think of is that you might not want the Bush administration to flag you for TSA screening because you checked out an annotated Koran. But, other than that – what’s not to love?

What’s more, when I look at my Amazon.com wishlist, the minimalist in me thinks “Why own books?” I mean, if anyone should know the virtues of the public library, it should be me. As far back as I can remember my dad has been a both a voracious reader and consumer of libraries. I recall him bringing home foot-tall stacks of books every week, reading and reading and reading.

Anyway… they didn’t have the Vonnegut book, nor did they have any Vonnegut books, which I’d guess are perpetually hot items. Marx is probably turning over in his grave.

A while back, during what seems like the forever-ago times when Keaton wasn’t here yet, I wrote about how I’d implemented a “baby budget” in the household. Sharaun and I took our spending down to a minimum and socked all her paycheck away as if it were non-existent, kind of a practice run for when Keaton did arrive and we became a single-income family. The experiment was a huge success, showing us not only that we’d be more than comfortable with just my income, but also that we had some great opportunities to adjust some spending areas. Well, Keaton’s now six months old and, as tends to happen with all once regimented things, Sharaun and I have let our budget slide a bit. So, in the interest of reclaiming our money with the least lifestyle impact possible, I’ve been doing some detailed budget analysis with the great freeware app, AceMoney. I consider us to be on the plus-side of avaricious now, and I’d like to center us more around a miserly creed. Hopefully one day we can not only pay off our own college loans, but start a fund so Keaton and her sibling(s) won’t have the same post-education burden.